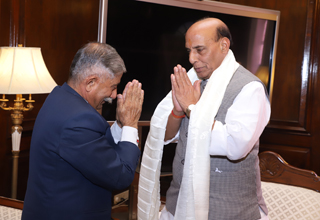 ITANAGAR, Nov 24: The Governor of Arunachal Dr. BD Mishra on Friday apprised Union Home Minister Rajnath Singh that in Arunachal Pradesh there is no Schedule Caste candidates for recruitment in Assam Rifles. The vacancies, therefore, for Schedule Caste categories remains unfilled in the state’s quota.
He requested that Arunachal Pradesh Schedule Caste vacancies be transferred to Schedule Tribe so that the state recruitment numbers can justifiably be met for the benefit of eligible youth.
The Governor, who is on an official tour to the national capital met Rajnath Singh at his New Delhi office and discussed various issues including recruitment of youth from the state in Assam Rifles and initiative to arrest migration of indigenous population from international border areas.
Sharing his views with the Union Minister, the Governor, who recently met the Director General of Assam Rifles, called for further strengthening of the Assam Rifle in their places of deployment and engagement. He also suggested for empowering the paramilitary forces to apprehend any person engaged in unlawful activity and attach officers from Narcotic Department with Assam Rifle units for prompt and effective action to control the drug menace in the State.
Expressing his concern on thinning of the border areas due to non availability of infrastructure and means of sustenance for the people living in remote areas, the Governor suggested that a modest beginning be made, as an experimental programme by taking up 3 – 5 villages and making them self sufficient in dwelling, toilet facilities, health centres, schools, small shopping complex, water facilities, communication and emergency helipad. Ration support can be extended to them the same way as is being done for many villages in border areas. Such schemes will go a long way in confidence building and sensitive border security scheme, the Governor underscored.