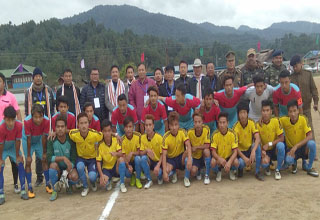 ZIRO, Nov 28: The qualifying round matches of Tadar Tang State Level Football Tournament for Zone-2 kicked off at Higher Secondary School Playground at Hija village on Tuesday.
Lower Subansiri won the opening match 1-0 against Kurung Kumey, thanks to a second half goal by striker Mihin Pullo.
The second match of the day was played between Kra Daadi and Upper Subansiri, in which the former defeated the latter by solitary goal scored by Charu Lalu in 51st minute.
The opening ceremony was attended by Lower Subansiri Zilla Chairperson Hage Kobin, government officials and gaon burahs.