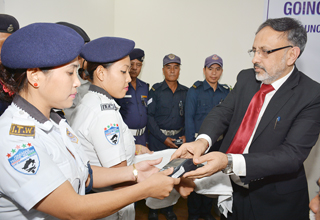 ITANAGAR, Dec 2: Union Home Secretary Rajiv Gauba launched the cashless challan payment system in Itanagar on Friday. Gauba distributed PoS machines to the traffic wardens during the event.
Capital Complex Deputy Commissioner, Prince Dhawan informed that the project has been started on a pilot basis at eight locations in the Capital Complex, and that it will later be implemented simultaneously in other districts.
Dhawan said the system would bring transparency as the citizens can now pay through credit/debit card or Aadhaar-enabled biometric system through the BHIM app.
The BHIM-Aadhaar pay app allows users to make payments through the fingerprint scanner by authenticating the biometric details of the user with the Aadhaar database. The DC said the earlier system of payment by cash will now be replaced by an easy bank transfer method.
Capital SP Sagar Singh Kalsi presented a live demonstration of the cashless challan system through the BHIM app.
As a step towards Digital India, the Capital Complex administration is promoting digital cashless payments in a big way by taking merchants and vendors onboard the BHIM-Aadhaar pay app, in collaboration with the SBI and the Itanagar Market Welfare Association.
The district administration will distribute free biometric readers among the merchants and establish a free wi-fizone at Akashdeep Market. The administration has also formed special teams to bring merchants on to the GeM portal.
The event was attended by the Chief Secretary Satya Gopal, DGP Sandeep Goel, and a host of officers.