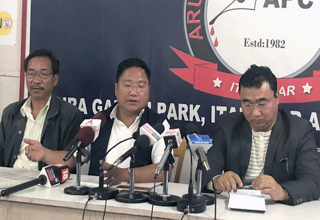 Staff Reporter
ITANAGAR, Dec 2: Breaking their silence over the death of former Doimukh MLA Ngurang Pinch on November 18, former Ministers Atum Welly and Tatar Kipa denied the allegations that they tried to hide the truth behind his tragic death.
Earlier, in a press conference on December 1, Pinch’s daughter, Ngurang Meena, had claimed that her father’s death was “a pre-planned political murder.”
Denying the allegations made against him, Welly disclosed that there were 21 members in the rafting expedition team, which included 14 males and seven females.
Giving out details of the night before the incident, Welly informed that they halted near the confluence of Popum and Poma rivers on the expedition guide, Ngurang Nega’s advice. Accordingly, a tent was pitched on the eastern bank and another on the western bank of the river, along with other locally made tents, and a campfire was set.
“In the evening, alcohol was served at the campfire and late Ngurang Pinch got drunk. Later, the rafting guide rowed Tatar Kipa and me across the river to the eastern side, along with two females. We (Welly and Kipa) stayed in one tent and the two females were given the other tent,” Welly said.
He claimed that the weather turned cold at night and Tatar Kipa headed for the camp fire around 1 am, while he (Welly) remained in his tent.
“When I woke up on the morning of November 18, one Ngurang guy came to the eastern side, looking for late Pinch,” Welly said.
“His body was later found in the river by Nabam Isaac at around 7 am,” Welly said.
On questions of why the family was informed later in the afternoon if they had found his body early in the morning, Welly claimed, “Our mobile phones were dead and we could not inform anyone outside the area. We rafted down to Ramghat with his body and informed the locals, who were already waiting for our arrival. It took six hours to reach Ramghat (mobile network zone) from the place of occurrence.”
Welly sought to refute allegations of his involvement in Pinch’s death, and affirmed that if the family members of Pinch are not satisfied with the SIT findings, they may seek a CBI inquiry into the matter.
Also denying the allegations, former Minister Tatar Kipa clarified that he was not the main organiser of the expedition as the family members claimed him to be.
Kipa also denied that he had invited Pinch to his office for the rafting trip, and counter-claimed it by saying that it was Pinch who had initiated the trip.
“I neither have any political ambition in his constituency, nor do I have any personal enmity with him. He was a close relative and a friend of mine,” said Kipa, adding that there was no question of a political murder.
He also claimed that he did not have the slightest idea that an altercation took place between Pinch and Ngurang Abraham, as he had fallen asleep.
“I am deeply hurt that my name was linked and taken by the family members on his death,” he said, and appealed to the aggrieved family not to give unsubstantiated statements.
“Let the SIT investigate the case and let the call records of our phones be analyzed. We want the truth to prevail,” Kipa added.
Both former ministers also appealed to the media to refrain from reporting a one-sided story.
Meanwhile, one Nabam Batey, who was also among the participants in the expedition, disclosed that there was a minor scuffle between Pinch and Abraham. However, he made it clear that he did not know the reason for the scuffle and was unaware of the circumstances that led to his death.
Meanwhile, the police have handed over Pinch’s case to an SIT to unearth the reasons leading to his mysterious death.