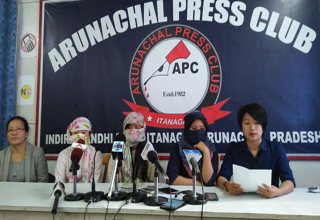 Staff Reporter
ITANAGAR, Dec 5: The death of former Doimukh MLA Ngurang Pinch continues to be shrouded in mystery even after three girls – out of the seven who had participated in the rafting expedition – presented their account of the events at the press club here on Tuesday.
The girls, who accompanied family members of late Pinch at the press conference, claimed that a heated argument had broken out between Pinch and Ngurang Abraham at the camp-fire.
“Uncle Pinch and Ngurang Abraham had a heated argument, which led to a minor scuffle at the camp-fire;
however, I don’t know what was the reason behind the argument,” said one of the girls.
She said the scuffle was witnessed by everyone at the camp-fire (on the western river bank). However, the girls were unable to disclose what led to the argument between Pinch and Abraham in the intervening night.
“In the morning, Pinch uncle’s body was spotted by Panye Isaac, and everyone was shocked,” one of the girls said. “The male members then held a meeting for about half an hour, after which Bamang Taji, Tatar Kipa and Atum Welly advised the girls not to disclose the incident to others.”
The girls also contradicted former ministers Atum Welly and Tatar Kipa’s statement that all the mobile phones of the team were malfunctioning. They said the mobile phones of some of the members were, in fact, functioning.
“Bamang Taji got the first call, probably from his home, on his mobile by 3:30 or 4 pm,” one of the girls claimed. She said, however, that no one received any call on the entire stretch of the no-network zone.
The girls also claimed that both Welly and Kipa asked them to give a police statement, with their signatures on an agreement copy stating that their names would not be disclosed to any media.
When contacted, Welly clarified that he was only referring to the mobile phones of the eight members who were rafting down with Pinch’s body; not about the rest of the members.
“I was referring to the phones of the eight members who were on the inflatable raft that also carried late Pinch’s body, as the phones got wet and died,” Welly said over the phone.
Former minister Kipa also clarified on taking the girls’ signatures for the police statement, claiming that it was not a scripted statement but a consensual one, aimed at maintaining confidentiality of their identities.
“It was nothing like a coordinated or scripted statement,” Kipa said. “The signatures were taken by consensual agreement on the note stating that they were willing to give a police statement on condition that their identities should not be revealed to the media.”
He said copies of the agreement are available with the police and the SIT.
Earlier, Pinch’s daughter, Ngurang Meena clarified that the deceased’s family members are not accusing Welly and Kipa of murder, but that they both failed to assist in establishing the truth of the incident.
Meanwhile, the aggrieved family and members of the Achi Dopum Welfare Society (ADWS) have said they will take out a candlelight march from DNG College to the IG Park tennis court here at 2 pm on December 7, in honour of the deceased’s memory.
The aggrieved family and the ADWS are demanding an impartial, time-bound SIT probe into the death, failing which, they said, they would demand a CBI inquiry.
Their other demands are for the arrest of ‘all the 21 suspects’; seizure of their mobile phones and submission of the phone records; and ‘exposure of the sex racket involving young girls in Arunachal Pradesh.’