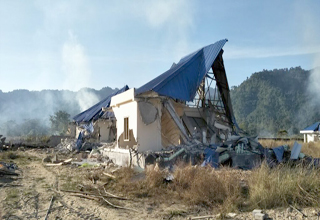 [ Amar Sangno ]
ITANAGAR, Dec 8: At least five under-construction tourist lodges were dismantled by officials from Assam in Kherbari village, seven kilometres from Kolap Tukar in Dollungmukh circle along the Assam-Arunachal Pradesh boundary in Lower Subansiri district, on Friday.
The eviction drive was reportedly led by North Lakhimpur Deputy Commissioner Barun Bhuyan, accompanied by the North Lakhimpur SP, Divisional Forest Officer (DFO) Dr B Basanthom, and officials from the Indian Air Force (IAF) and paramilitary forces.
When contacted by this daily, the DC confirmed that he led the eviction drive “on a request from the IAF,” as the IAF claims that the area where the lodges were being constructed falls under its bombing exercise zone.
Sources informed that the eviction drive was carried out at around 9:15 am, when the group started dismantling the structures in Kherbari village, on the Arunachal Pradesh side.
Dollungmukh Circle Officer Koj Tacho, who was present during eviction drive, informed that he did not get any eviction notice from the Assam officials.
“By the time I reached the spot, they had already dismantled five under-construction structures and boundary walls.
When I strongly protested the North Lakhimpur DC claimed that he had intimated his Lower Subansiri counterpart and the tourism director,” the CO said.
“We were outnumbered by their paramilitary personnel. Despite repeated pleas, they went on to dismantle the structures,” Tacho added.
The North Lakhimpur DC on his part reiterated that the eviction was carried out on the basis of the IAF’s request.
“I have written several times to the Lower Subansiri DC and the Arunachal Pradesh tourism director, raising concern over the structures being built along the disputed area. But I did not get any response from their end,” he said.
He said the Assam side has been maintaining the status quo along the boundary as per the Supreme Court ruling. “But the Arunachal government violated it by constructing structures.”
However, Lower Subansiri Deputy Commissioner Kemo Lollen denied that his office received any complaint letter from his North Lakhimpur counterpart, intimating about any proposed eviction drive.
Lollen strongly condemned the Assam officials’ brazen move.
“They should have issued an eviction notice to maintain peaceful coexistence between the two states,” he said.
Tourism Director Kangto Danggen also clarified that his department did not receive any official letter from the North Lakhimpur DC informing about any eviction drive.
Waving off the DC’s argument, a high-ranking tourism department official said the structures had been constructed “deep inside Arunachal Pradesh,” and that “one has to cross Raj Ali, Kherbari and Midpu villages” to get there.
The project’s developer has a land possession certificate (No LMZ/LPC/DLMK-8/2010/1465, dated 29 March, 2010) issued by the Lower Subansiri administration. Sources say the developer also has a non-encumbrance certificate issued by the Ziro ADC (Judicial), and a no-objection certificate issued by the Banderdewa DFO.
The latest eviction drive has reportedly created a fear psychosis among the villagers on the Arunachal Pradesh side.
AAPSU condemns
Meanwhile, the All Arunachal Pradesh Students’ Union (AAPSU) has strongly condemned the eviction drive carried out by the Assam government.
The AAPSU stated in a release that such provocative acts on the part of the Assam government are the main causes of disturbance along interstate boundary, which deeply affects the cordial relations among people of both the states.
AAPSU General Secretary Tobom Dai urged the state government to ‘wake up from deep slumber and take up the matter with its Assam counterpart, so that such incidents do not recur.’
The union said that a similar incident had been reported a month ago, ‘but the Arunachal Pradesh government has failed to protect and safeguard the territorial integrity and sentiments of the indigenous people of the state.’
A team of the AAPSU will visit the spot on Saturday to gather firsthand information about the eviction drive.