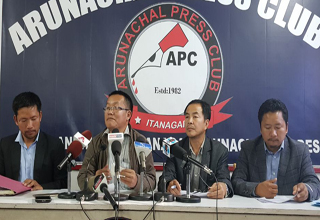 Staff Reporter
ITANAGAR, Dec 11: Continuing their movement against the anomalies found in the Preliminary question papers of the Arunachal Pradesh Public Service Combined Competitive Examinations (APPSCCE), agitating aspirants led by a steering committee on Monday rejected the expert committee constituted by the Arunachal Pradesh Public Service Commission (APPSC) and demanded fresh examinations within the next three months.
Addressing reporters here, a member of the steering committee, RGU Professor Nani Bath, said the committee rejects the expert committee “since the errors are crystal clear and any layman could point them out with ease.”
The steering committee instead sought an inquiry committee headed by a retired judge of the High Court or a serving Sessions Judge.
The aspirants have also reportedly done intensive groundwork of their own with specialists in various subjects.
Claiming that things have gone wrong under the charge of the Commission’s chairman as well as the secretary, the steering committee said that the chairman should resign on moral ground, and sought action against the comptroller of examination.
Setting 15 December as the deadline, the steering committee said if the APPSC fails to address its demands, an FIR would be registered against the officials responsible for setting the question papers in such an erroneous manner, followed by a democratic movement.
The committee also cited apprehension of a leakage in the question papers as several of them were directly extracted from websites, such as www.sociologydiscussion.com and www.cssforum.com.pk.
The committee also showed the Public Administration test booklet of Vision IAS – a coaching centre in Naharlagun. It claimed that at least 55 of the questions in the test papers of the coaching centre and those that came in the APPSCCE (Preliminary) were exactly the same.
Apart from concerns of a leakage, Prof Bath also said that questions cannot be reproduced from other sources or photocopied, as such acts amount to tampering and plagiarism.
“The paper-setter can be prosecuted for such copying and pasting,” he claimed.
Candidates of Sociology, Public Administration, Animal Husbandry & Veterinary Science, and Indian History further pointed out the errors in the question papers.
According to them, the Public Administration paper has at least 32 questions outside of syllabus, along with several spelling and clerical errors.
An Animal Husbandry & Veterinary Science candidate also claimed that over 60 questions were outside of syllabus and copied from the book ‘Vetscan’, along with over 20 spelling errors – just as they had been printed in the book.
There were a total of 23 errors in Sociology, with similar issues of copying questions from an online discussion forum, while Indian History also had over 10 questions outside of syllabus as well as some errors.
The candidates pointed out that frivolous mistakes, and even a single misplaced alphabet, can change the answer, and can cost them precious time.
“Why should we bear the brunt of the sluggishness of the Commission?” candidate Ige Dirchi questioned.
Speaking to this daily, APPSC Chairman Tajom Taloh said that they have received all the memorandums of the candidates, and have sought the assistance of an expert committee and are awaiting its report.
He, however, added that they could not rush the committee into submitting a report until they were ready with one.
He also assured that all the grievances would be looked into for an amicable solution.
Meanwhile, the People’s Party of Arunachal (PPA) also called on the chairman of the APPSC and its members on Monday, and demanded fresh examinations.
However, the APPSC members were of the view that since there has been no leakage of question papers, the demand for re-conducting the Preliminary Exam cannot be considered, the PPA stated in a release.
It claimed that members of the Commission were of the firm view that re-conducting any examination would set a wrong precedent, which the Commission could not compromise with.