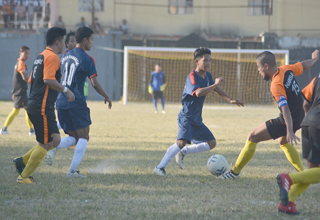 NAHARLAGUN, Dec 11: Lower Subansiri scored twice in the second half, coming from a goal behind, to beat Namsai 2-1 in a group ‘C’ match of the 16th Tadar Tang State Level Football Tournament at Rajiv Gandhi Stadium here on Monday.
Namsai took the lead in the 17th minute with a goal from Reyor Doke.
Lower Subansiri came out all guns blazing in the second half and pumped in two goals in quick succession in the 74th and the 76th minutes. The scorers were Tarh Gungte and Taw Takar.
Earlier, West Siang grounded Lower Dibang Valley 7-1 in a lopsided match.
Limar Loya, who scored four goals, became the first player to score a hat-trick of goals in the tournament. Other scorers were Joken Ete and Jumdo Padu.
Biju Menjo scored the consolation goal for LDV in the 79th minute.
Tuesday’s matches:
Longding Vs East Kameng (12:15 pm)
East Siang Vs Lower Dibang Valley (2 pm)