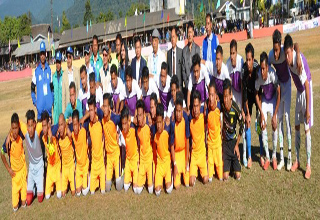 KAMBA, Dec 11: The 10 day-long Liromoba Sports Carnival – 2017 came to an end with the football final match played at the general ground here in West Siang district on Monday.
The event, which was conceived by Liromoba MLA Nyamar Karbak, witnessed a wide range of sports activities like river rafting, football, volleyball, marathon race, yoga, and aerobic classes.
Addressing the closing function, Deputy Speaker of the State Legislative Assembly, Tumke Bagra, said that sports has emerged as one the biggest industries worldwide. He was all praise for Karbak “for conceiving such a noble idea” to organize the sports extravaganza.
“This kind of sports activities will go a long way in hunting latent sports talents from far-flung and backward areas of the constituency,” he said.
West Siang Deputy Commissioner Swetika Sachan said that Kamba town has become a hub of important activities and it needs a good circuit house to meet the accommodation needs.
The motive behind organizing the second edition of the sports carnival was to spot rural sports talents and foster the spirit of teamwork and oneness among various PRI functionaries of the constituency.
It is worth mentioning here that Chief Minister Pema Khandu, who inaugurated the event on 2 December, had launched the Sports Policy on the occasion.
Nyamar informed that the second edition of the sports carnival will be organized at Liromoba next year.
Yomcha ADC Rujum Raksap, who was given additional charge as ADC Kamba, particularly for the event, said that the spirit in which the festival was conducted would definitely create awareness on the importance of games and sports.
The football final match, which was played between LBKN and KDPP, marked the end of the sports carnival. The match was won by LKBN by 3-0 goals.
Deputy Speaker Bagra gave away the trophy to the winner. (DIPRO)