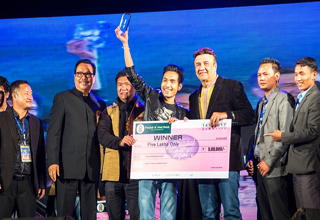 ITANAGAR, Dec 15: Alar Dupak (19) from Mirku village in Pasighat was declared the winner of the second edition of Arunachal Idol contest at the grand finale held at Indira Gandhi Park on 14 December.
Tenzin Cheopel was declared the first runner-up, and Yami Puri was adjudged the second runner-up. Majo D Lendo and Tarh Chunya were declared third and fourth runners-up, respectively.
Famous Bollywood music director and composer, Anu Malik, and Chochung Dema Thungon, one of the top seven finalists of ‘The Stage – 3’ attended as celebrity guests of the night.
Attending the grand finale of the singing competition, Chief Minister Pema Khandu lauded the organizing committee for providing a platform to the talent of the state, and announced that the state government will partner with the event in its next edition.
He also assured that “the proposed state music studio will be discussed during the next financial year.”
Drawing the attention of celebrity guest, Anu Malik, to the scenic beauty of the state, Pema urged him to promote Arunachal Pradesh and to convey the message to Bollywood to explore the North-Eastern states and the raw talent they have to offer.
Malik while observing that the locals in Arunachal have the added advantage of speaking Hindi, said he would promote genuine talents from the region.
Later, Alar enchanted the audience with his singing talent and walked home with Rs 5 lakh as prize money.
The grand finale witnessed a grand performance by Anu Malik, Arunachal Idol’s first season winner and runner-up, Pokge Karbak, and Anu Mra, Chochung Dema and young artists from the region.
Deputy Chief Minister Chowna Mein and Transport Parliamentary Secretary Likha Saaya also attended the programme.
The event was organized by the Arunachal Orphan Care Society and sponsored by TK Engineering Consortium.