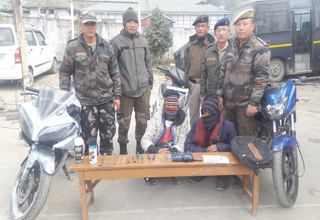 BOMDILA, Dec 15: The police here in West Kameng district nabbed a group of bike lifters in the wee hours of Thursday – following a hot pursuit – some three kilometres away from here, on the Bomdila-Tawang road.
Based on information, a police team along with CRPF personnel laid a naka on the Balipara-Charduar-Tawang road, in between Bomdila Pass and the Forest nursery, at two in the morning.
The police team intercepted three riders on two motorcycles and a scooter. On being questioned, the riders managed to escape with the stolen bikes, but hot pursuit by the police and the CRPF jawans led to the surrender of Palo Sangdo and Pape Sangdo.
However, the alleged mastermind, Tari Sangdo, managed to escape, taking advantage of the darkness.
A case under section 457/380/34 IPC has been registered at the police station here, and the arrested duo is currently in police custody. (DIPRO)