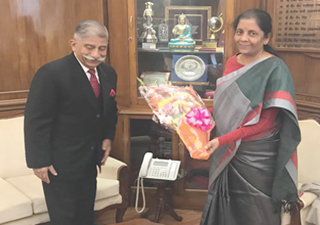 NEW DELHI, Dec 20: Construction of sainik schools in Arunachal Pradesh will commence latest by February 2018, it was decided during a meeting between Arunachal Pradesh Governor Dr BD Mishra and Defence Minister Nirmala Sitharaman here on Wednesday.
The governor briefed the minister on the border security scenario and the high morale of the soldiers deployed in the border areas of the state, and suggested that construction of sainik schools in the state start at the earliest.
It was also decided during the meeting that the Indian Army would introduce more welfare schemes for the civilians in the coming months.
At the initiative of the governor, it was decided that eight villages identified by the Army in the forward-most segment of the international border would be developed into self-sustaining units with proper living amenities for the people living in those villages.
Earlier in the day, the governor met the Chief of Army Staff (COAS), General Bipin Rawat, at the Army Headquarters here, and the two discussed the upcoming Army recruitment drive Arunachal Pradesh.
The governor requested the Army chief to conduct pre-recruitment programmes in every district of the state to motivate youths to join the Indian Army.
“This will not only provide ample employment avenues to the youth of Arunachal Pradesh but also give them an opportunity to serve the country,” he said.
The COAS assured that “teams from the Army would go to every district in the state to help prospective candidates in documentation and physical fitness, and train them to compete in the recruitment,” scheduled to be in the second week of February, 2018.
The COAS instructed the Army recruitment director general, who was called to the meeting specifically for the purpose, to render all assistance to the youths in all the districts of Arunachal Pradesh so that they may be selected for the army. (PRO)