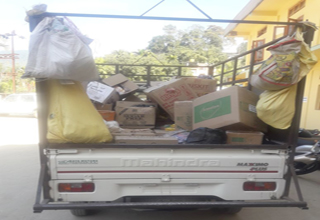 ITANAGAR, Dec 20: The capital district administration seized IMFL items from a private commercial vehicle on Wednesday after the vehicle owner was found supplying the IMFL items to small vendors at Division IV here.
Capital Complex Deputy Commissioner Prince Dhawan informed that the DA has been carrying out such checks for the last few months, and stressed that the DA has zero tolerance against such illegal activities.
He sought the cooperation of the public and appealed to them to abide by the rules so that such exercises could be successfully implemented.
“The youths get drawn to excessive drinking which harms not only the youths in particular but the society as a whole,” said the DC. (DIPRO)