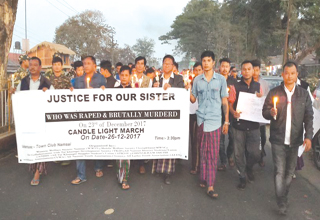 Staff Reporter
NAMSAI, Dec 26: A 13-year-old girl was found brutally raped and murdered in Chongkham circle of Namsai district on 23 December.
The Chongkham police station officer-in-charge (OC) informed that, according to the statements collected, the young child had gone to the fields with her older brother to check on stray animals .
Seeing that there were not many stray animals to keep away from the fields, her brother decided on heading back home.
According to the brother’s statement, his sister wanted to play for a while longer in the fields, but he had to complete his errands, and so, after a little discussion, it was decided that she would go straight back home in a short while.
Accordingly, the brother left her in the field and headed out to the market in Chongkham at around 10 am.
When he reached home, he saw that his sister had not returned yet, and the family, along with other residents of the village, started a frantic search for her.
When they visited the field, the girl’s naked body was found in a nearby ditch covered with jungle bushes. There were multiple laceration injuries on her neck and both hands, as the assailant(s) had slit her throat and also chopped off three fingers of her left hand.
The OC said that the police have carried out investigation and rounded up a few suspects for interrogation.
A student of Class 8, the young girl was on vacation.
Following the incident, several organisations and individuals have raised their voices against the abhorrent incident.
The All Tai Khampti Singpho Students’ Union(ATKSSU), the All Namsai District Students’ Union(ANDSU), the Namsai unit of the Women’s Welfare Society, the Mahila Welfare Society Chongkham, and the All Namsai Area Youth Association(ANAYA), besides other organisations and the public of Namsai held a candlelight march for the deceased and demanded justice.
A memorandum was submitted to the deputy commissioner, wherein the organisations sought immediate arrest of the unidentified culprits; registering a case under the Protection of Children from Sexual Offences Act; proper forensic tests to speed up the investigation; and providing compensation to the deceased’s mother on compassionate grounds.
The organisations warned that if the administration and police fail to apprehend the culprit(s) within 15 days, they would hold a series of democratic movements in the district.
Condemnation pours in Meanwhile, Deputy Chief Minister Chowna Mein has expressed deep anguish over the shameful incident and directed the Namsai district administration to take all necessary steps to apprehend the culprit(s) involved in the heinous crime at the earliest.
The Tai Khampti Development Society (TKDS) has expressed solidarity with the bereaved family and demanded immediate arrest of the culprit(s). It said the culprit(s) should be awarded the capital punishment.
‘This dastardly and heinous crime cannot be compared with any crime or be tolerated in any civilized society,’ it said.
The TKDS also expressed concern over the rise in law and order problems in the district.
‘It is time that the administration and the custodians of law and order pulled up their socks and stopped things from going beyond the bounds,’ it said.
The Theravada Buddhist Society, Itanagar, the ATKSSU, the ANDSU, the ANAYA, and several other organisations have also condemned the heinous crime and demanded stringent punishment for the perpetrator(s).