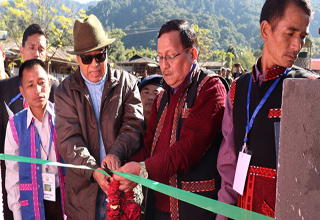 YEMSING, Dec 28: Stating that education is the foundation of development of every society and family, former chief minister Gegong Apang has appealed to parents to cooperate with teachers in moulding children in the right direction.
Apang said this during the inaugural function of the two-day golden jubilee celebration of the government primary school here in Siang district on 26 December.
Congratulating the school’s management committee for the milestone it has achieved, Apang said every child has the right to education, and that children should get quality education.
Stressing on cordial relations between teachers, students, and parents to maintain a proper educational atmosphere, Apang advised the school’s students to respect their teachers and elders, keep themselves updated on current affairs, and take interest in co-curricular activities for personality development.
Earlier, Apang unveiled the school’s golden jubilee memorial stone. This was followed by felicitation of senior members of the society and students.
The school started on 12 February, 1967, with 19 students and one locally appointed private teacher, Galong Taloh.
The villagers commended the contribution of Dakmo Jini, the then circle officer, for introducing the educational institution in far-flung Yemsing in the early ’60s. They also recalled the initiatives taken by Gegong Apang in bringing road connectivity and electrification in the area during the late ’80s.
Among others, the first graduate from Yemsing village, Tator Dupak, government officers, public leaders, teachers, and students attended the function. (DIPRO)