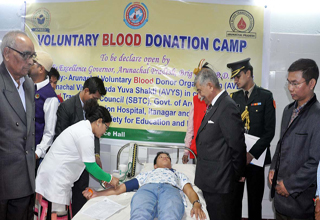 ITANAGAR, Dec 29: Governor Dr BD Mishra on Friday inaugurated the blood donation camp organized by the Arunachal Voluntary Blood Donor Organization (AVBDO) at the RK Mission Hospital (RKMH) here.
Organized in association with the State Blood Transfusion Council, the RKMH, and the Arunachal Pradesh Society for Education and Development, the camp was the 71st blood donation initiative of the Arunachal Vivekananda Yuva Shakti (AVYS), of which the AVBDO is a part.
In his address, the governor urged the people to volunteer to donate blood, saying, “A unit of your blood can save many lives and bring happiness to many families.”
The governor, who is the ex-officio president of the state branch of the Indian Red Cross Society (IRCS), lauded the AVBDO and the AVYS for their service, and urged the state’s youths to emulate the AFVYS and help needy persons.
The governor emphasized that blood donation should be “without any commercial motive.” Recalling the military operation he carried out as an Indian Peace Keeping Force brigade commander in Sri Lanka in 1988, the governor said that he and his troops had donated blood for wounded and captured enemy soldiers under the provisions of the Geneva Convention.
“Donating blood for the sick and the wounded has been a proud military tradition in the Indian Army,” he said.
RKMH Assistant Secretary Swami Pradeeptananda, AVYS Chief Advisor Pradeeep Kumar Behera, and AVYS Chairman Ramesh Jeke also spoke.
Jeke explained that the camp was organized in anticipation of accidents occurring during the New Year festivities. He informed that last year four lives were lost for want of blood during the new year.
Among others, State IRCS Secretary Dr Emi Rumi and Health Services Joint Director Dr Nabum Budh were present on the occasion.
Later the governor interacted with the volunteer donors and advised them to “carry forward the philanthropic work.” He also handed over the donor certificate to the first blood donor.
Thirty-four units of blood were collected from the volunteers who included members from the Women Helpline. (PRO to Governor)