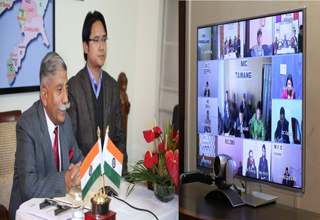 ITANAGAR, Dec 30: Governor Dr BD Mishra held his maiden video conference with deputy commissioners to review the implementation of national flagship programmes in the districts from the Raj Bhavan here on 29 December, and advised them to harness the best potential available for the development of their respective districts.
The governor emphasized that the fruits of development must reach to the man in the last rung of the society, and enquired about the status of various flagship programmes in education, health, and rural development sectors, including Aadhaar linking, open defecation-free status, connectivity, and development of border villages as model villages.
He suggested conducting soil-testing in border villages to assess the possibility of growing walnut and pine nut in suitable altitudes. He informed that certain European countries have developed hybrid varieties of walnut, “which would be beneficial for the villagers as they start bearing fruit within four years of plantation.”
The governor also asked the deputy commissioners to facilitate the pre-recruitment training for Indian Army recruitment in the districts,so that maximum youths could join the Indian Army.
At the initiative of the governor, the pre-recruitment training, which had earlier been planned to be held in only two districts, will now be conducted in all the districts of the state.
The district officers assured the governor of their best endeavour to meet the expectations of the people.
They also thanked him for selecting the remotest border villages to be developed as model villages. (PRO to Governor)