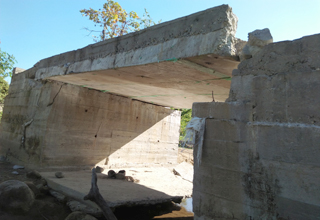 NARI, Jan 3: A recently constructed culvert at Pam Village under Nari subdivision in Lower Siang district has collapsed causing much distraught and anger among the local residents and the student bodies of the region.
Reportedly executed by the Nari division of Rural Works Department, the now collapsed culvert, connecting Seren Circle and Nari at Pam village, as according to the Ramle Banggo Students Union (RBSU), was constructed only some six to seven months ago.
The RBSU, which have alleged of gross misuse of funds by executing a poor quality of works by the RWD division at Nari, has demanded stringent action against the concern authorities and all those involved in trying to dupe the public by providing low quality work.