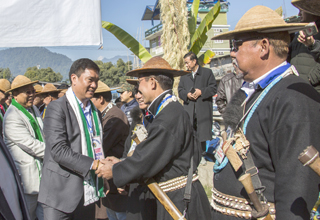 AALO, Jan 10: Chief Minister Pema Khandu has said that the Centre has assured Rs 50,000 crore for improving road connectivity in the state and funds will be released against only those roads, where there are no issues of land compensation.
Addressing the 18th foundation day of the Galo Welfare Society (GWS) here on Wednesday, the chief minister informed that the Union Transport Ministry has already assured Rs 50, 000 crore package and as per the directions from the Centre, it will fund only such road projects, where there are no issues of land compensation.
The foundation day was celebrated with the theme of ‘peace, progress and prosperity through better road connectivity’.
Pema assured that the Potin to Pangin road will be executed at the earliest and informed that majority of land compensation issues have been resolved. He assured to take up the matter with the Centre, contractors and with the department for early start of the work.
The CM further assured to start funding for link roads in Aalo, which will begin from the current financial year.
Stating that survey and investigation for railway lines in foothills and other upper region has already started, Pema proposed to discuss with the Centre for a new railway line connecting Aalo.
He urged the people to take part in the development process and be part of ‘Team Arunachal’. He called upon the community-based organizations (CBO) to take proactive role in matters of development for the welfare of their society.
The Chief Minister said the state government was keen to bring various reforms aimed at rooting out corruption and to bring in work culture and sought cooperation of CBOs in this matter. He said the recently held policy conclave by the state government is aimed at such interventions, where even retired government officials have been deputed, who are working to bring out such policies.
He also stressed on harnessing natural resources to generate revenue and urged the CBOs to play active role. He said the government is aiming to raise revenue through taxation, tourism, agriculture and horticulture and hydropower.
“The state government is planning to bring in reform in hydropower policy as per which it proposes to raise the percentage of share for the local area development fund from its 12 per cent free power share,” he said.
The government wants the project affected people to have greater share from the benefits accrued from hydropower generation, Pema said, adding that the matter will be discussed in the Cabinet soon.
He further informed that the state government plans to fund local festivals through CBOs for which certain mechanism is being worked out. He said the purpose is to encourage celebration of local festivals and to foster communal harmony among different communities.
Responding to a memorandum from the GWS for creation of a central divisional commissioner, the CM asked the legislators from the central belt to work out on a proposal that could be presented to the Cabinet for discussion.
On the occasion, the Chief Minister released a Galo textbook and Galo audio album. He also felicitated social activists and achievers from various fields, like late Tomo Riba, late Bomto Kamdak, Gumjum Haider, Jene Hai, Bigam Doke Londo, Teetu Yoka, Nyadar Loya, Rokom Bado and many others from the Galo community.
Earlier, Secretary General of Tagin Cultural Society, Lardik Kare and Tourism Parliamentary Secretary PD Sona also spoke.
The occasion was also attended by Deputy Speaker Tumke Bagra, WCD Parliamentary Secretary Gojen Gadi, SYA Parliamentary Secretary Nyamar Karbak, APEDA Chairman cum Aalo East MLA Jarkar Gamlin and MLAs Pakgna Bage, Kento Rina and Kardo Nyigyor.