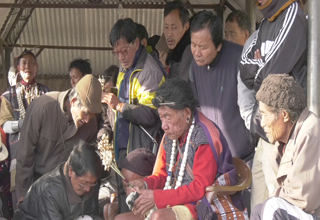 [ Taro Chatung ]
ITANAGAR, Jan 11: Murung, the most expensive festival of the Apatani community, is facing extinction due to the lack of interest among the present generation to become Murung priests.
The six-day festival of the Apatani tribe, which involves more than 50 hours long rituals, is celebrated by a family or a group of families for the wellbeing of the family members as well as the members of the community, in the month of January every year.
In the past, the festival was celebrated by one or two families from each six major villages of Apatani plateau; but, surprisingly, in the current year, the festival is being celebrated by only one family – that of Millo Kani – from 8 January with Duyu Hailang as its priest.
The year 2019 may simply go off without Murung festival, and it is feared that there will be no Murung rituals in near future unless any interested person comes forward to promote and encourage the Murung priesthood.