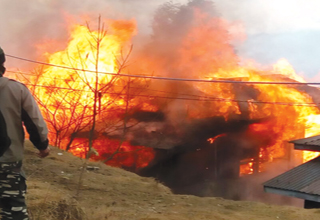 TAWANG, Jan 13: Two SIB quarters were gutted in a massive fire that broke out around 3:30 pm here on Saturday.
Gas cylinders have reportedly exploded in the fire, further fuelling the devastation.
Timely arrival of fire brigade from the Army contained the fire and saved two more nearby quarters from being engulfed.
Though no loss of life has been reported, nothing could be saved as the fire spread rapidly.
Electric short-circuit is suspected to have caused the fire. (Tawang Vigilance)