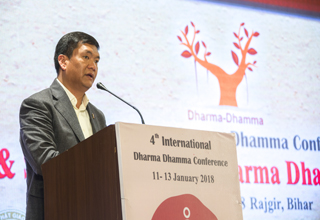 RAJGIR, Jan 13: Chief Minister Pema Khandu said that since India has inherited a vast multi-ethnic, multi-religious and multi-cultural society, the principles of Dhamma and religious tolerance are the only way forward for our great nation and universal harmony as well.
The Chief Minister said this while attending the 4th International Dharma Dhamma Conference on ‘State and Social Order in Dharma-Dhamma Traditions’ here today.
He further said that “In today’s world, where religious fanaticism and social tensions have become a part of present reality, Dhamma becomes all the more relevant. We need to understand and acknowledge the dignity of men irrespective of their social, religious and economic status. Adoption of virtuous behaviour through the ancient Indian ideology of Dhamma is perhaps the best way to bring social solidarity. Dhamma is the righteous practise to wisdom, Harmony and affection amongst men that could only and only lead to peace and equality.”
He said the indigenous people of Arunachal Pradesh are proud inheritors of a rich culture, each distinct from the other and as colourful as possible, who follow various faiths, beliefs and religions though they remain indigenous at core.
“We have seen the effects of modernization and globalization on smaller indigenous communities in other parts of the world. We in the North East, particularly in Arunachal Pradesh, are indeed lucky that outside influence has not much affected our way of life, our beliefs, our rich cultural tradition and most importantly our firm belief on religious tolerance,” said the chief minister.
Pema said that the ‘Dharma-Dhamma’ has been a fundamental ideology in all Indian originated traditions. The principles like truth and non-violence, peace and harmony, humaneness and spiritual linkages, mutual care and consideration, universal friendship and peaceful co-existence, and attitudes like selflessness, detachment, social service and cosmic wellness have been integral part of Indian cultural ethos.
Nalanda University, in collaboration with the Centre for Study of Religion and Society, India Foundation, Ministry of External Affairs and the Vietnam Buddhist University, had organised the three-day conference at Rajgir International Convention Centre, about 100 km from the state capital Patna. (PRO, CM)