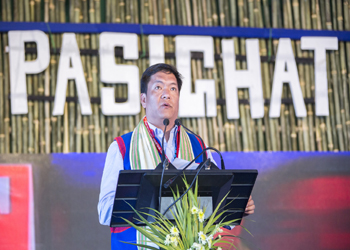 PASIGHAT, Jan 21: The foundation stone for smart city was laid at the IGJHS school playground here on Sunday by Chief Minister Pema Khandu, who informed that the investment of Rs 1534 crore would aim at core element infrastructure development.
The infrastructural development of the smart city would include adequate electricity and water supply, sanitation and solid waste management, efficient urban mobility and public transport, robust IT connectivity and safety and security of citizens, particularly of women and children, the CM said during a ceremony held here to celebrate the occasion.
The chief minister said the people of Arunachal would remain thankful to the central government for approving two smart cities for the state – Pasighat and Itanagar – despite being a small state.
“Established in 1911, Pasighat, along with 97 other cities, had been selected for the first round of the smart city race in 2016. Pasighat, with a population of around 25,000, was the only town from Arunachal Pradesh to figure in the list of third round and this is the result of the team effort of the local community, administration and public leaders.
I salute the people of Pasighat for their hard work and determination,” said the chief minister.
The CM appealed to the people to avail optimum benefits under the project and join hands with the government cutting across political affiliations.
He informed that the Centre had offered fund for smart city mission in the ratio of 50:50 and a delegation was led by him to request the PM to adopt the 90:10 ration – 90 per cent by the central government and 10 per cent by the state considering the feeble economy of the Northeastern states.
“The PM responded positively and assured to examine the matter,” informed the chief minister.
Pema expressed hope that the smart city project would become a reality and not remain only on paper.
“The big challenge in smart city mission is the implementation part,” he said, and appealed to the people of the historic town to discourage bandh culture and fight against all odds in making Pasighat a people-friendly and crime-free city.
Highlighting other developmental issues, Pema said that the state government has given special emphasis on road communication, including establishment of ALG and railway connectivity, and that 12 locations have been chosen for survey.
He also informed that all exercise to shift divisional offices of engineering departments to their respective zones are being completed and list of officials are being kept ready to be posted. He said that as a result the central zone offices of PWD and Power departments are being established in Pasighat.
“Gaining smart city aim will only be fulfilled if the people become smart,” said Union MoS for Home, Kiren Rijiju.
He said the efforts of the state government, the Pasighat Municipal Council, the MPs, legislators and the citizens helped to achieve the goal.
Deputy Chief Minister Chowna Mein said the resources of the state must be kept in mind while formulating the project at the micro level, adding that the state government has discussed with the central government for funding in a 90:10 ratio in favour of the state government. The current scheme provides for a 50:50 funding option.
Municipal Affairs Minister Nabam Rebia expressed hope that the smart city project would bring visible development in Pasighat, and said his ministry would extend all possible help and cooperation in this regard.
Local MLA Kaling Moyong spoke on the hard work of the PMC, administrators and public that helped achieve smart city with support from the state government, the union MoS for state and urban housing, and the municipal affairs minister.
Congratulating the people, Lok Sabha MP Ninong Ering said that the union government should consider providing special financial support to Arunachal Pradesh.
He said he had met Urban Housing Minister V Naidu in this regard and written several letters to him and Prime Minister Narendra Modi.
State BJP President Tapir Gao recalled the great contribution of the forefathers who had donated land a century ago to establish Pasighat.
RD Minister Alo Libang, Power Minister Tamiyo Taga, parliamentary secretaries, MLAs, PMC Chief Councilor Kaling Doruk, councillors, officers, and others attended the programme. (CM Cell, with inputs from DIPRO)