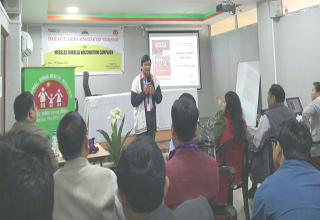 Staff Reporter
NAHARLAGUN, Jan 23: “India accounts for a whopping 36 percent (49,200) of the total number of child deaths worldwide due to highly infectious diseases like measles and rubella, which can be prevented through timely vaccination,” said UNICEF health specialist (Northeast state), Dr C Ravichandran during a state-level media sensitization workshop on the Measles-Rubella Vaccination Campaign (MRVC) conducted at the National Health Mission (NHM) state training hall here on Tuesday.
The workshop was conducted in view of the upcoming MRVC to be launched in the entire country from February 5 next.
Emphasizing the need for effective awareness and coverage against highly infectious diseases like measles rubella, Dr Ravichandran informed that Arunachal currently has the second lowest vaccination coverage rate in the entire country.
He further said that the state has recorded 54 per cent measles vaccination coverage which could be improved through more awareness campaigns.
Speaking about the two highly infectious diseases (measles and rubella) among children, he informed that there is a 90 per cent chance of a child contracting measles if the child has not been immunized earlier.
“In a developing country like India, children are most susceptible to contracting the said diseases because of widespread undernourishment. Therefore, it is necessary that all the children between the ages of 9 months to 15 years are properly immunized to fight against the diseases,” said Dr Ravichandran, adding that rubella or congenital rubella syndrome is another disease which is common in developing countries.
He informed that a mother could transfer the rubella virus to her baby, which could cause mental retardation in the baby.
“It is not easy to detect the symptoms of the rubella virus as the infected person will not produce any specific symptom other than a mild fever and possibly a rash which would be over within a couple of days,” he explained.
Also speaking about the myths and misconceptions prevailing among some sections of people regarding the immunization process, Dr Ravichandran said that the media can play a positive role in clearing certain biases against the campaign and creating much needed awareness amongst them.
Family Welfare Director Dr K Lego also underscored the role of media in disseminating information to the masses regarding the campaign, which is considered as the one of the largest immunization programmes in the world, under which about 27 million children are vaccinated.
Giving statistics of the reduction in the number of cases of measles among children in the country, NHM nodal officer Dr D Padung in his presentation informed that the country has witnessed a major decrease in the number of measles cases (from 30,606 to 17,198 cases), which is a positive step towards achieving cent percent MRV coverage.
Speaking with regard to the state, Dr Padung disclosed that the state has recently detected sporadic cases of measles outbreak among five children in Newsa village under Longding district and some other places.
“These cases have been studied and steps have been initiated to ensure that similar outbreak could be prevented in future,” he said, adding that this time, the department is aiming to achieve cent percent immunization coverage in the entire state through combined efforts of other ministries and departments through comprehensive planning.
Dr Tapasya Raghav, Special Secretary, Health and Family Welfare and Mission Director NHM, in her address informed that the state government has set a target to achieve five lakh children in the upcoming MRVC in the state, and sought the support of all departments, and the media in particular, in achieving the target.