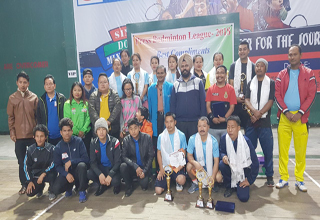 ITANAGAR, Jan 27: Tenung Tabing, representing Doordarshan Kendra (DDK) and Nellie N Manpoong of the Arunachal Press Club (APC) won the men’s and women’s singles titles in the 2nd Press Badminton League (PBL)-2018 at the MLA Cottage badminton stadium here on Saturday.
While Tenung was declared winner after his opponent H Open Singh decided not to continue with the match due to an injury, Nellie on her part showed her dominance over Evana Tissopi, beating her in straight 21-12 and 21- 16 sets to win the title.
Nellie, pairing with Mibom Dai, also won the mixed doubles title, defeating the pair of Damien Lepcha and Evana in 2-1 sets (16-21, 21-16, 21-15).
Damien and Evana pocketed the first set 21-16. But Mibom and Nellie came back strongly and won the remaining two sets 21-16, 21-15 and the title.
The women’s doubles was more of a battle between the DDK players. The pair of Ibom Gara and Jumter Riba was no match for Lipi Nyodu and her partner Tumngam Bagra as the latter defeated the former in straight 21-12 and 21-12 sets.
Rakesh Doley and Denhang Bosai, representing All India Radio and Department of IPR respectively, put a tough fight in front of DDK’s H Open Singh and Goi Gara in the men’s double.
Though Rakesh and Denhang won the first set 21-17, the pair of Open and Goi managed to bounce back in the second and won the set 21-13. The third set saw a fearsome yet entertaining encounter between the two teams and 21-19 was the score by the end of the match in favour of Open and Goi.
Tenung Tabing was declared ‘Super Player’ of the tournament while the PBL Women’s Player of the Tournament award went to Nellie Manpoong.
The title of ‘Super Smasher’ went to H Open Singh, while Denhang Bosai was adjudged ‘Promising Player’ of the tournament.
Capital SP Sagar S Khalsi gave away the prizes to the winners and participants, along with senior journalists Tongam Rina and Pradeep Kumar Behera.
Congratulating the finalists, Singh said, “Your participation in the tournament is more important than winning it, and I am sure that a lot of youngsters will draw inspiration from your efforts.”
Arunachal Press Club president Chopa Cheda congratulated all the participants and winners and also the organizing committee for coming up with “such a wonderful tournament for the press fraternity of state,”.
Cheda further extended his appreciation to the Arunachal State Badminton Association (ASBA) for its support in conducting the tournament.
On Friday, the tournament was declared open by IPR Minister Bamang Felix.
Addressing the participants, Felix congratulated the media fraternity for promoting badminton, and called upon all to take out time for sports, as well, apart from other day-to-day tasks.
“Working for survival is important; however, staying healthy is equally important in today’s date and sports in the best medium to remain fit and healthy,” said Felix.
Echoing his senior, Sports & Youth Affairs Parliamentary Secretary Nyamar Karbak in his speech also called upon all to play at least one sport or the other.
“Playing sports and games not only keeps your mind and body healthy but also your soul,” said Karbak, wishing the players success.
Also to speak on the occasion were Sports Authority of Arunachal chairman Bamang Tago and Arunachal Pradesh Union of Working Journalists president Amar Sangno.
Among others, Capital DC Prince Dhawan, SP Sagar Singh Khalsi and Sports Director Tadar Appa were present to cheer the press fraternity on the opening day.
More than 40 media persons, including officials and officers, from the department of IPR participated in the tournament, which in its second year, was conducted with the aim of bringing the entire media fraternity under one umbrella through the medium of sports.
The organising committee was headed by Irani Sonowal of News 18.
National umpires Penya Bagra and Taniya Yasap were the chief and deputy referees for the tourney respectively.