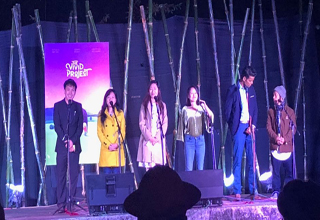 Young poets vow to speak up

Staff Reporter
ITANAGAR, Jan 27: Young poets and artists vowed to speak up against social issues through poetry, arts and music during The Vivid Project (Unspoken Words), which was launched at a city hotel here on Saturday evening.
Conceptualized and produced by Wild Flower Production, The Vivid Project is a web-based poetry series focusing on various issues in Arunachal Pradesh.
Six poets participating in the project – Tai Tugung, local rapper Khekho Thiamkho (popularly known as K4 Khekho), and young poets Subi Taba, Oyi Taki, Millo Ankha and Sushant Jha – made a statement in unison that they would speak up.
“I found my voice, I found my voice. I have chosen to speak up and that’s my choice,” the poets vowed in unison before presenting their pieces before the rapturous audience.
Addressing the event, award-winning writer YD Thongchi said, “Arunachal has been gifted with talented artists but that needs to nurtured and encouraged.”
Terming the initiative a wonderful platform, Thongchi exuded hope that the project would give a platform to engage young minds to speak up for their own causes.
Legislative Assembly Speaker TN Thongdok in his address encouraged the budding poets and artists to speak up to bring changes in the society.
The project’s director, Karry Padu spoke about her journey and the idea behind the project.