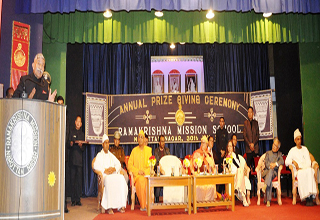 NAROTTAM NAGAR, Jan 30: Governor Dr BD Mishra on Tuesday urged the students of Ramakrishna Mission School here in Tirap district to promote nationalism, patriotism, unity, and integrity among fellow human beings.
The governor said this while addressing the students and faculty members during the school’s annual prize distribution ceremony. He said he has high hopes for the students, and expressed his appreciation for the Ramakrishna Mission Order.
Ramakrishna Mission trustee, Swami Sarvabhutananda Maharaj in his address exhorted the students to be champions in every sphere of life.
The governor and his wife felicitated Class II student Senwang Dada, son of Ashok Chakra recipient Havildar Hangpan Dada. They also gave away prizes and cash awards (scholarships) to the winners in academic activities, including the Governor’s Award for aggregate highest marks in Class X to Ajo Linggi.
The swami gave away the prizes to the winners of games and sports events.
Earlier, on Monday, the governor, who is on a three-day tour of Longding, Tirap and Changlang districts, visited Khonsa, where he exhorted the people of Tirap to stand against poppy cultivation, the gun culture, and corruption in order to bring peace, prosperity and development in the district.
“Opium addiction is destroying the society, and the people themselves have to address the challenge,” he said, and urged gaon burahs and panchayat members to play their role in eradicating the drug menace.
Speaking against the gun culture prevalent in the district, the governor appealed to elders and guardians to bring back their children to the mainstream society. Recalling the valour of Ashok Chakra awardee Havildar Hangpan Dada, he encouraged the youths to join the Indian Army, which is conducting pre-recruitment rallies in the state.
The governor also exhorted the people to fight corruption by ensuring transparency, accountability, continuity, review and audit, and midterm correction in all the development programmes and schemes.
Expressing concern over the poor performance of the health and education sectors, he said if these two sectors are addressed in the right perspective, “the society will be on the ascending mode.”
Local MLA Tirong Aboh in his speech welcomed the governor and his wife, and highlighted the challenges faced by the people of Tirap.
Members of the Nocte Mothers’ Federation and students of several schools presented a traditional cultural programme to mark the occasion.
In the afternoon, the governor met village chiefs, GBs, PRI members, ex-servicemen and government officers separately. After listening to their grievances, he suggested ways to address their issues.
In the meeting with the heads of departments, Dr Mishra asked them to reach out to the people, and to take extra steps to ensure that the fruits of development and the benefits of programmes and schemes reach the beneficiaries.
He emphasized on proper implementation of important schemes, and exhorted them to motivate the people to curb drug addiction and the gun culture.
Deputy Commissioner PN Thungon briefed the governor on the status of various central and state government schemes being implemented in the district. (PRO to Governor)