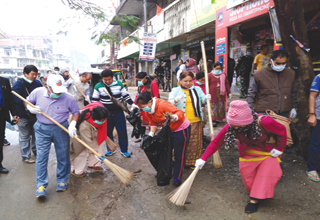 ITANAGAR, Feb 5: Governor Dr BD Mishra has said that the ongoing cleanliness drive in the Capital Complex should be continued “until a good sense of cleanliness and sanitation practices is developed among the populace.”
Participating in a cleanliness drive at Lower Vivek Vihar here on Monday, the governor said the drive should be continued until the people adapt to the habit of keeping their surroundings neat and clean.
He suggested to Itanagar Municipal Council (IMC) officials to involve senior citizens and students in cleanliness drives.
Councillor Taba Yall Nabam, along with members of NGO Sangtam Ajen and Chief Municipal Executive Officer Olik Taring also joined the cleanliness drive.
Later, the governor, accompanied by Chief Municipal Councillor Kipa Kaku, Deputy Chief Municipal Councillor Tarh Nachung and IMC officials inspected some of the public utility projects.
The governor also visited the sites proposed for installing public toilets, and suggested some changes, keeping in mind the needs of shoppers and the general public. (PRO to Raj Bhawan)