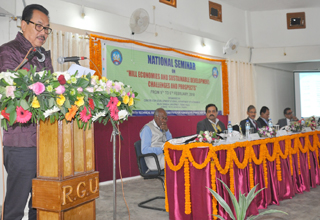 RONO HILLS, Feb 5: Deputy Chief Minister Chowna Mein said that huge investments are likely to be pumped into the Northeast region in the coming years, which he said would usher “unprecedented development in this hilly region.”
He said this while attending a national seminar on ‘Hill economies and sustainable development – Challenges & prospects’ organized by the Rajiv Gandhi University’s (RGU) Centre for Development Studies here on Monday.
He said that the hilly states of the NE region are endowed with abundant natural resources and blessed with varied rivers, wildlife, flora and fauna, and called it “a pool of bio-resources.”
Mein said the region has high prospects of development in agro-forestry and horticulture, plantation crops, organic farming, animal husbandry, recreation and tourism, hydropower, mining and quarrying, cottage and small scale industries, and agro- and forest-based industries.
He added that the need of the hour is to find out ways to transform these resources into an economic driving force.
“There is need to design a region-specific policy to overcome the constraints in the hill states and to reap the benefits from comparative advantages,” he said.
He asked the experts to offer concrete suggestions from the outcome of the discourse “and help the state government in framing a roadmap for policies to tap and convert the huge potentials into a viable economy.”
He also called for incorporating feasible and innovative recommendations in planning and policy making of the government.
RGU Vice Chancellor Prof Tamo Mibang in his speech said that peace is a prerequisite for the development of any region and good connectivity is another important aspect to propel economic development.
Prof Prabhat Kumar Pankaj, Director, Jaipuria Institute of Management, Jaipur, who was one of the founding faculty members of the RGU, emphasized on parameters that bring in happiness to the people.
He said that any measure of sustainable development should enhance the wellbeing and happiness of the people. He suggested introducing courses in schools and colleges to promote happiness, adopting alternative paradigms on measuring development, and achieving holistic wellbeing through the government’s programmes and policies.
Prof SK Nayak (HoD), Prof NC Roy and Prof A Mitra of the Economics department also spoke.
Scholars from Bangalore, Punjab, Haryana, West Bengal and other states are participating in the two-day seminar which will deal with various issues pertaining to the hill states, such as tourism, problem of urbanization, problem of migration and industrialization, livelihood diversification, gender issues, agricultural issues, PDS & food security, and mobilization of resources and bio-resources. (PRO)