[ Chintan Sheth ]
The Yarlung-Tsangpo river slices through the ancient Himalayan rocks, dividing two 7000 meters high mountain peaks (Namcha Barwa and Gyala Peri).
At three times the height of the Grand Canyon in United States of America, the Yarlung-Tsangpo gorge is the deepest canyon on Earth and is surrounded by perennially snowed in mountain peaks.
Several massive rivers of ice, called glaciers, feed into the Yarlung-Tsangpo river. These extremely slow-flowing glaciers scrub off rock layers into pieces, mixing it with water that flows into the mountain rivers.

Every year till April, the slow-melting glaciers and the Eastern Himalayan forests are the primary source of river water. During the monsoon months, rainfall carries sediments from the mountain slopes to the rivers and also causes dangerous landslides. In November, the monsoons turn weak and the rivers of Arunachal Pradesh turn blue. As the monsoon weakens, the river water clears up of their sediments and people can make use of water once again.
However, 2017 was an exception. Intense earthquake activity in November 2017 triggered widespread landslides on the Yarlung-Tsangpo river (200 km upstream from Tuting). Three natural rockslide dams have formed on the river due to blockage by landslides and debris.
It is only a matter of time before the natural dams burst and unleash a severe disaster along the Siang river valley.
Satellite imagery by NASA and planet.com show that landslides of this size and danger level have not occurred on the Siang river for almost half a century.
Complicating this issue further, between 21 and 27 October, 2017, an avalanche occurred on the Sendapu glacier which feeds into the Yarlung-Tsangpo river. Images from 27 October show the avalanche releasing water, ice, rocks and other debris which has in turn submerged several islands on the river.
Pools of water can be seen on the glacier surface, indicating that melting ice may have caused mud and rocks to slip. This avalanche was not triggered by earthquakes. This was the first indication of the Siang river being contaminated by natural reasons and matches with the first reports given in early November by the vigilant people of Arunachal Pradesh.
The big M6.4 earthquake on Gyala Peri, and a series of earthquakes happened exactly 20 days later on the morning of 17 November.
The M6.4 that struck on 17 November was the largest and the shallowest earthquake since the year 1900 in that region. A satellite image five hours later showed several landslides. Satellite images from December reveal several scattered landslides and a 100-square-kilometre area of mountain slope entirely collapsed.

A table of the earthquakes in November 2017 and their distance from the M6.4 are given below. This data is obtained from IRIS Earthquake Browser. 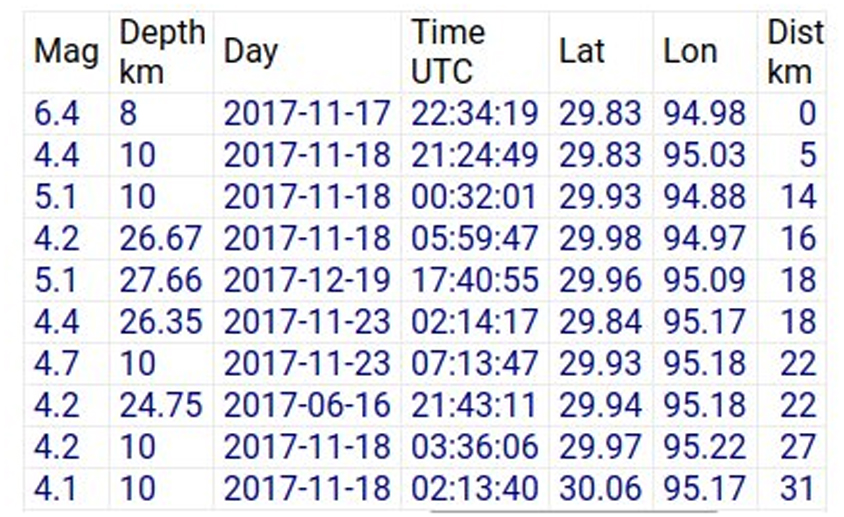 The high earthquake activity of the region is due to the Indian plate thrusting and squeezing against the Tibetan Plateau uplifting the Himalayas. Earthquake swarms have been reported from the area of the Yigong dam before and were behind the disaster on the Siang in the year 2000.
Earthquakes on the mountains Gyala Peri and Namcha Barwa have been rare events until now. The scale of the November landslides was so massive that just within 30 km of the river’s length, the mountain slopes have been stripped bare of forests and now are just mud and rock. Alarmingly, along 12 km of the river’s length, the landslides have partially blocked the river flow and have created three natural dams one behind the other.
Dr David Petley is the world’s leading reporter of landslides. His landslide blog endorsed the first report of the disaster in Arunachal Times (21 December, 2017) but was unsure of the dam volumes.
Dr Jeffrey Kargel, a senior research scientist specializing in studying glaciers at the University of Arizona, independently assessed the volume of one dam. He was the leading scientist that put together a Humanitarian Volunteer Group of scientists during the 2015 earthquakes in Nepal, where 9000 people died and the economic loss was estimated to be $ 10 billion. The on-ground response team and his science team during the Nepal earthquakes reportedly undertook one of the broadest and fastest international emergency remote sensing and data analysis campaigns ever led by NASA for any earthquake-affected region.
Professor Kargel’s comments on the Yarlung-Tsangpo disaster were: “There is still some uncertainty about the volume of the lakes, but my rough estimate of about 19 million cubic meters for just one of the lakes is still enough to make a possible catastrophic lake release. Furthermore, the chain of lakes means that one lake draining into the next could create conditions for a very sudden release of water, meaning very high peak discharge.”
His assessment should be taken as an alert to immediately prepare for an imminent disaster along the Siang river in Arunachal Pradesh and Assam.
Past landslide-blocked dams
Outbreak floods (floods breaking out when landslide-blocked dams break) have been recorded over the last few decades. The Nepal earthquake of 2015 caused landslides that dammed rivers like the Marsyangdi. China has extensive experience in handling landslide-dammed rivers. In 2000 they unsuccessfully attempted to break the Yigong rock slide upstream without informing India, which led to devastating downstream effects along the entire length of the Siang river.
In 2008 a series of earthquakes with a M8.0 in Sichuan, China caused hundreds of landslides and as many landslide dams. China successfully drained several of them. However, the extremely remote and harsh terrain along the Yarlung-Tsangpo river will make draining these rivers a challenging task – one that may require the assistance of experts from many countries.
The disasters charter for humanity
The third United Nations Conference on Exploration and Peaceful Uses of Outer Space was held in 1999, with the European and French space agencies initiating the Disasters Charter. This international collaboration between owners and operators of Earth observation satellite missions was started to aid humanitarian rescue authorities in the event of a natural or manmade disaster.
The Indian Space Research Organization (ISRO) represented India and was the fourth agency to sign the charter in 2001. The charter provides free access to maps and processed satellite images at fine scales for areas that have been devastated. India and China have direct access to the charter, meaning they can immediately send an activation request and numerous Earth observing satellites (including those of international agencies) will assist in monitoring the landslide blocked dams in real-time.
The clock is ticking till the next monsoon arrives in May 2018, after which the dams can burst at any moment. Cloud cover will furthermore obstruct clear views of the Siang hampering disaster relief operations.
It is a critical time for India and China to work together for a humanitarian cause. Immediate activation of the charter, bilateral meetings and deployment of operations to safely drain the dams will be a timely call that can prevent loss of lives and property of the people of Arunachal Pradesh. (Chintan Sheth works on Indian forests using satellite images at the National Centre for Biological Sciences, Bengaluru, Karnataka. Writer can be reached at chintz604@gmail.com and @tweetweetforest)