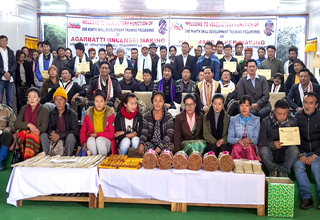 LUMLA, Feb 11: “Imparting proper training and skills to unemployed youths is the only solution to Arunachal’s unemployment problem,” said Skill Development and Entrepreneurship (SD&E) Parliamentary Secretary Jambey Tashi.
He was addressing the valedictory function of a skill development programme on ‘agarbatti and handmade paper-making’, sponsored by the SD&E department, here in Tawang district.
The programme was organised to impart training in the ancient Buddhist trades of incense-making and handmade paper-making to 60 trainees.
Saying that government jobs are scarce, Tashi said the SD&E department will conduct vocational training programmes “on a war footing” throughout the state to train unemployed youths to turn them into an organised workforce.
A ‘skill development sensitization, motivation and trainees selection rally’ is currently underway in various district headquarters to provide training in over 20 trades, including plumbing, masonry, driving, computer operation, textiles, handloom, and handicrafts.
“We will soon organize a mega event of this in Tawang also, combining the three districts of East Kameng, West Kameng and Tawang,” Tashi informed.
He urged the youths to benefit from the Industrial Training Institutes, which provide free-of-cost vocational training in several trades, depending on the trainees’ aptitude.
Lumla ADC RD Thungon urged the trainees to upkeep their newly learnt skills “by commercializing their ventures and products.” He expressed appreciation for Tashi for initiating the pilot projects in Lumla and Zemithang, bordering Bhutan and Tibet, respectively.
Tawang District Industry Centre (DIC) Deputy Director Gyati Kacho called for more synergy and collaboration between the Industry and the SD&E departments.
He advised the trainees to form self-help groups and approach the DIC for subsidized loans under the PMEGP to set up business ventures and manufacturing units, based on their newly-acquired skills. He also explained other welfare schemes and programmes available under the two recently bifurcated departments.
Besides the trainees, the Lumla ZPM, panchayat leaders, HoDs and others attended the function, which also featured distribution of certificates and honorariums to the trainees. (DIPRO)