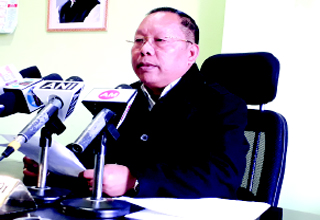 ITANAGAR, Feb 13: Just two days before the proposed visit of Prime Minister Narendra Modi to Itanagar, the Arunachal Pradesh Congress Committee (APCC) has launched a blistering attack on Modi and the BJP.
APCC President Takam Sanjoy predicted that Modi would be announcing numerous sops for Arunachal, “just like he did in Bihar and Andhra Pradesh prior to elections.”
Flanked by former party president Padi Richo at Rajiv Gandhi Bhavan here on Tuesday, Sanjoy said, “Modi will be giving lip service this time, too, as the budget for 2018-19 has already been presented.”
He said that Modi, after becoming the PM, “gave the greatest slap to Northeast India by withdrawing the North East Industrial & Investment Promotion Policy.”
He also said that withdrawing of the status of special category state from the sensitive border state of Arunachal Pradesh has hurt the progress of the state.
Accusing the central government of misusing central agencies like the CBI and the IT enforcement department, even in Arunachal, to harass the people, Sanjoy asked the Modi government to “stop such unwanted harassment of the straightforward and honest Arunachalees.”
He also charged the ruling BJP and its parent body, RSS, with propagating only one religion and lifestyle in a multi-ethnic and multi-religious nation.
Highlighting various anti-people polices of the Pema Khandu-led BJP government in the state, the APCC president said, “The ambitious CM’s Universal Insurance Scheme, launched by Congress CM Nabam Tuki, immensely benefited about 2,25,128 households by offering cashless treatment upto Rs 2 lakh in hospitals empanelled across the country, and won the national level Koch Award. But surprisingly, it was discontinued in 2017.”
The prestigious central institute, NERIST, is without a permanent director since 2013, while the NIT is in doldrums as release of its payments, including outstanding ones, has been halted, Sanjoy said.
“The Khandu government talks of priority to road, air and telecommunication, but the construction of the Trans-Arunachal Highway – a gift of UPA PM Dr Manmohan Singh – is moving at a snail’s speed. The Portin-Pangin stretch, surrendered by the NHIDCL, has been delayed for long, which has evoked strong criticism from the commuters. No one knows the status of the Itanagar greenfield airport project as the state government has been claiming that the landowners are unwilling to part with their land,” said Sanjoy.
“I as a landowner have never objected to the greenfield airport at Hollongi. Does it not mean the Union MoS (Home) Kiren Rijiju and Khandu have been telling white lies?” he asked.
“Proposing to set up more camps for Chakma-Hajong refuges and adoption of the Tibetan Rehabilitating Policy 2014 while neglecting the peace-loving indigenous people living in communal harmony in the state would have far reaching consequences,” Sanjoy warned.
The Congress also asked the chief minister to reveal how much fund the state government has received from the Centre.
“While responding to press persons after joining the BJP, Pema Khandu had said there would be continuous fund flow from the Centre with the forming of the BJP government. How much funds have been received by the Arunachal government so far, we would like to know,” said Sanjoy.
He also said there was enough “clinching evidence” that the BJP government at the Centre and the state “are anti-secular, anti-religious, anti-tribal, anti-democratic and anti-people, and attempting to befool the people of Arunachal.”