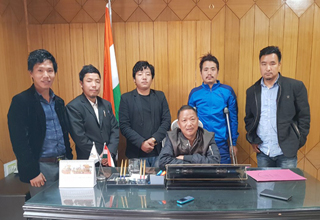 Staff Reporter
ITANAGAR, Feb 21: The Government Degree College at Palin is set to be made functional from the next academic session, informed the All Kra Daadi District Students’ Union (AKDDSU) on Wednesday here at the press club.
Addressing reporters, the AKDDSU said that PHE & WS Minister Bamang Felix held a meeting on Wednesday and assured the union that their four-point demand has been considered by the government and action has already been initiated.
AKDDSU president Gora Rikam said that the union was also thankful to the government that a principal along with faculty members would be posted soon and the students would have a quality higher educational institute within the district.
Regarding establishment of a district hospital at Palin, the union was assured that discussions would be held with the chief minister for the same. The primary health centre at Tali will also be provided an ambulance within this month, said Rikam.
The demands for additional classrooms, toilets, boundary, etc of the government secondary school in Tali and the government higher secondary school in Palin would be sanctioned in the next financial year under SADA, while construction of the Yangte to Tali road has been sanctioned at Rs 10 crore (construction of which would start after completion of the tender process).