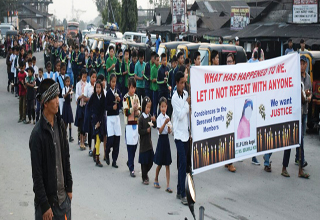 ROING, Feb 22: Hundreds of people from all walks of life, including school children, participated in a candle light vigil, organised here on Wednesday last as a tribute to the five-year-old girl who was brutally raped and murdered at Namgo village.
People marched from the old Roing gate and later gathered at the general ground where a prayer was held. A similar march was also organized at Anini.