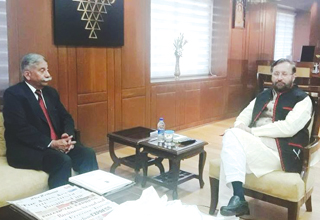 ITANAGAR, Feb 26: Governor of Arunachal Pradesh Dr BD Mishra on Monday called on Union Minister of Human Resource Development (HRD) Prakash Javadekar at New Delhi and discussed various pressing issues in the higher education sector of Arunachal Pradesh.
The governor, who is the ex-officio President of the NERIST Society, briefed the union minister about issues related to the premier technical institute of the state, the North Eastern Regional Institute of Science and Technology (NERSIT) in Nirjuli, particularly the vacant post of the NERIST Director.
The issue was discussed in detail, following which the HRD minister informed the governor that early action on issues related to NERIST will be taken to resolve it at the earliest.
Further, the governor emphasized that those private universities which do not meet the standard academic requirement, must not be allowed to continue. ‘There must be transparency in establishing private universities’, he added.
Higher Education Secretary, Kewal Kumar Sharma and senior IAS officials were present on the occasion. (PRO)