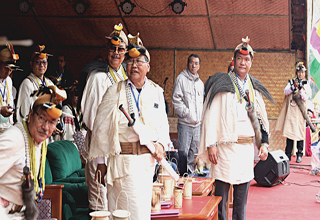 YAZALI, Feb 27: Indigenous festivals like Nyokum can be promoted for cultural tourism and the state government is actively considering the option, said Chief Minister Pema Khandu.
Addressing the Nyokum celebration here on Monday, the Chief Minister said sufficient fund provisions will be kept in the next budget for celebration of local festivals by all tribes of the state.
Lauding the Nyishis for preserving their rich cultural heritage and taking pride in their roots, Pema said Arunachal Pradesh is lucky to have them as one of the most populous communities and leading from the front for the rest to follow.
He appealed to the community to set an example in preservation of the state’s rich and varied cultural heritage so that the world comes to Arunachal to witness and savour its unique identity.
“It is indeed praiseworthy that the organizers of this festival have not sought any financial help from other sources but have voluntarily contributed to it,” he said.
The Rain God blessed Nyokum at its 50th year of central celebration at picturesque Yazali here this year, and Chief Minister Pema Khandu along with Deputy Chief Minister Chowna Mein not only donned but lived the life of a proud Nyishi for the day.
Sporadic downpours added to the taste of the misty millet – Poliing!
While dwelling upon few programmes initiated for welfare of the people and development of the state, he said that connectivity is the only panacea to all hurdles of the state on its way to self-sufficiency. He appealed to the people to not demand or expect huge land compensations for road projects but sacrifice for a better future of their children.
On the recent visit of Prime Minister Narendra Modi to Itanagar and expectations of the people, Pema said Modi is unlike any prime minister the country ever had.
“It is but natural for the people to expect some financial package from the PM but Modiji is different. He doesn’t believe in making announcements but in actual work. He has been kind enough and is helping Arunachal grow as required. He will always there when needed,” he asserted.
Deputy Chief Minister Chowna Mein also had words of praise for the Nyishis. He viewed the effects of globalization cannot be stopped but can be minimized without compromising with the state’s distinct cultural identity.
“Nyishis have kept alive their great legacy. We, the other tribes of the state, need to learn from you!” he said.
Mein, who also holds the Finance portfolio, informed the people of the pain being taken for preparing the ensuing budget of the state.
“We are painstakingly preparing the state budget with several consultations and pre-budget meetings. Recently, we had a fruitful meeting with all community based organizations of the state. Our objective as well as commitment is to deliver a pan-Arunachal budget that will cater to each and every need of each and every community of the state,” he assured.
Both the CM and DCM earlier paid their respects to the Nyokum deity at the altar to the chants of the priests.
According to festival organizing secretary Biki Bath, this year the Nyokum at Yazali has gone pure ‘organic’. He informed that the main stage, pandals, huts and all houses in the festival ground have been constructed from locally available bamboo by the villagers themselves.
Meanwhile, several pioneers and prominent personalities like late Tomo Riba, late Tadar Tang, late Omem Moyong Deori, Bengia Hemonto, Bengia Tab, Nabam Tata and others were felicitated on the occasion.
A veteran of two wars, 1965 and 1972 – Taba Chada, a retired army personnel and few pioneering priests were also felicitated by the chief minister.
A pan-Arunachal effect was given to the colourful cultural programme of the day wherein cultural troupes from various communities of the state like Monpas, Galos and Khamptis performed their traditional dances. Indigenous games and sports also marked the celebrations.
Besides local legislator Likha Saaya, several former legislators, officers and community leaders were present on the occasion.
Meanwhile, reports of Nyokum celebration have also been received from Raga, Sagalee and Sangram.
Attending the festival at Raga, the district headquarters of the newly created Kamle district, Parliamentary Secretary Tesam Pongte called upon the youths to develop positive attitude and ideas and abstain from bad habit like drugs addiction to lead a healthy life.
Earlier, he released an audio cassette “Kamle” produced by the all Kamle District Students Union, in which various local singers have lent their voices.
Director of Information and Public relations Obang Tayeng hailed the spirit of the people of Raga in showcasing their rich and cultural heritage, which he said was exemplary.
At Sagalee, Minister for Power, Industries, Textile and Handicraft Tamiyo Taga called for preserving the tribal culture, traditions and practices for identity.
“Nyokum is not only festival of Nyishis but festival of the entire Abo Tani race. It is one of the most popular festivals of the entire state,” he opined.
State BJP Vice President and Chief Spokesperson Dominic Tadar called upon the youths of the area to regenerate and infuse tribal culture in every way of life.
PWD Executive Engineer (Sagalee division) Techi Ramda, who also is the Chairman of the festival celebration committee, read out the Nyokum mythology.
At Sangram, Parliamentary Secretary for Sports and Youth Affairs Nyamar Karbak on Monday called upon the people of the state to shun the habit of lending money in high interest rates while asserting that it is sending a wrong message to the society, especially to the younger generation.
He was addressing the Nyokum Yullo celebration at Sangram on Monday.
Lauding the Nyishi community for always preserving their rich cultural heritage Karbak said that it was a privilege for him to attend the celebrations.