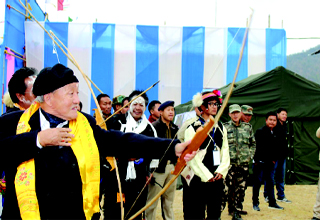 Staff Reporter
SHERGAON, Feb 27: The three-day ‘Rhododendron & third Losar festival’ to promote, preserve and protect the flora and fauna and age-old culture and tradition in Shergaon and nearby areas concluded at the picturesque town of Shergaon in West Kameng district on Tuesday evening.
Attending the valedictory programme as chief guest, Education Minister Honchun Ngandam said that the people of the state should stop copying ideas from other states and rather support the ideas of Sherdukpen youths in festivals to conserve rhododendron and nature in their areas.
The function was also attended by Legislative Assembly Speaker TN Thongdok, who highlighted on the festival and spoke extensively about the importance of conservation and developing lifestyle.
Besides plethora of colourful cultural programmes, the three-day mega festival also witnessed extensive talks on conservation and importance of wildlife and nature.
The department of Forest and Environment held workshops with participants involving nature walks and nature photography, besides plantation of tree saplings.
A historical resolution was passed by the Sherdukpen people to put a ban on cutting of the rhododendron tree and to conserve and preserve the flowers.
The rhododendron festival which coincided with the third Losar festival also saw cultural exchange programme among various villages, such as Zargaon, Orang, Baligaon, Gogro, Panbari and Bodos of boundary areas of Arunachal, who have been maintaining old-age relations since time immemorial.