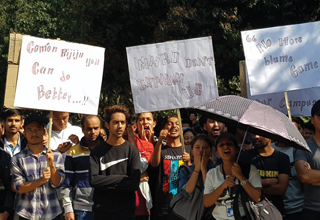 Staff Reporter
NIRJULI, Feb 27: Students of the North Eastern Regional Institute of Science and Technology (NERIST) came out in large numbers on Tuesday to put a halt on the working of the institute for an indefinite time as the government failed to address their demand for a permanent director within the given timeframe.
Leading the protest, the Students Union of NERIST (SUN), along with the All Arunachal Pradesh Students’ Union (AAPSU) had earlier served a month-long ultimatum to the Union Ministry of Human Resource Development (MHRD), which ended on 24 February.
Speaking to this daily, SUN president Banta Natung said that the demand is the same as it has been for the past four years -to appoint a permanent director for the state’s leading technology institute.
“We had given an ultimatum of one month on 24 January and in the meantime written letters to several people, including the governor who is the president of the NERIST Society and education secretaries of all the eight north east states, but there has been no response from the authorities concerned. We shall sit-in on this peaceful protest till we hear from the MHRD or till our demands are met”, said Natung.
Also upset with the “hollow promises” of Union Minister of State for Home Affairs Kiren Rijiju, the students said that they were highly disappointed with Rijiju mainly because as a representative of the state in the centre, he has been unable to do anything tangible for the premier technology institute of the state.
“He made assurances last October that a permanent director would be appointed within a month’s time, but nothing has been done on ground,” Natung said.
He further informed that the students’ union held a meeting with the NERIST Faculty Association, NERIST Employee Association and Alumni Association, who had urged them to defer the protest.
The students were assured that that Professor BV Ramana Reddy of the University School of Information Communication and Technology, Guru Gobind Singh Indraprastha University, New Delhi has been appointed as permanent director.
However, since there was no official document to support the assurance, the students waited till today to begin the protest.
Meanwhile, Rijiju informed this daily that he had followed up the case and sought the appointment of a new NERIST Director by 31st December, 2017, adding that “the matter got stuck in the committee appointed by the All India Council for Technical Education for various reasons”.
“I’m terribly upset as the internal bickering and complaints against the candidates for directorship are having adverse effects. The process is also very cumbersome, but let the MHRD appoint regular director following the laid down rules and regulations. I’ve done so much for infrastructure and other development of NERIST, but one director issue is spoiling everything,” he added.
In an e-mail copy, which is available with this daily, the NERIST Registrar had written to the MHRD Joint Secretary regarding the protest beforehand, to which the Joint Secretary responded, “The file for appointment is under consideration of the government”.
With agitating students and suspended classes, faculty members of the institute refrained from taking classes, and vehicular movement was put on complete halt inside the campus.
Only the post office, the medical store and bank inside the campus were allowed to operate.
Student union representatives of all eight north eastern states in the institute, the All Arunachal Pradesh Students’ Union and the Rajiv Gandhi University Students’ Union also participated in the protest and showed their support.
Current NERIST Director in-charge Prof Tamo Mibang is also the Vice Chancellor of the Rajiv Gandhi University, and has limited authority over the functioning of the NERIST as its in-charge.
There are over 1800 students from base level to post graduation level alone.
The students have also created a Twitter handle #SaveNERIST and intend to send a message across to the PMO, Prakash Javadekar, the MHRD and Kiren Rijiju.
The SUN has been seeking a permanent director since 2013 and the additional extension of Prof Mibang as the director in-charge, has irked students.
Prof Mibang reportedly refused the extension of charge and wrote to the MHRD for early release – but the ministry nevertheless entrusted him with the charge till the end of March 2018.
Prof Mibang has been in charge of the NERIST since February 2017. His assumption as the director in charge of the NERIST was marked by sporadic protests spearhead by the SUN in April 2017. The SUN forced the institute to shut down for a couple of days, demanding a regular director.