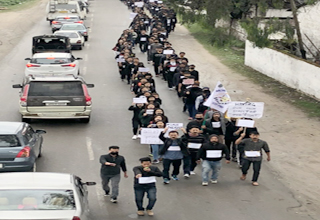 [ Amar Sangno ]
ITANAGAR, Mar 3: Even as the Bharatiya Janata Party began its wild celebration at the election victory in Nagaland and Tripura, a melancholic silent descended upon the North Eastern Regional Institute of Science and Technology (NERIST) in their fight for a regular director.
Agitating students under the aegis of the Students’ Union of NERIST (SUN) took out a ‘silent march’ this morning.
Thousands of students joined the march, which started from NERIST gate to Bage Tinali in Nirjuli, wearing black clothes marked with the #SaveNERIST slogan and their mouths sealed with black tapes.
Rajiv Gandhi University Students Union (RGUSU) president Giogi Aja also joined the silent march in solidarity with the SUN.
The premier technical institute is caught in turmoil after the students launched an indefinite strike from 27 February 2018, demanding that the MHRD appoint a regular director for the NERIST.
NERIST has been without a regular director since 7 October, 2014, after then Director Professor Dipankar Pal was unceremoniously removed from the post.
“We have had enough of shouting and noises. We will now continue our fight with silence until a new director is appointed,” said Banta Natung, SUN president.
“From today onwards, no political leader will be allowed to lecture upon us. We have heard enough from them. They will be allowed to meet us only when they come with an appointment order of the new director from the MHRD,” Natung said, informing that it was decided by the students’ representatives of all eight northeast states.
Natung’s each oration was met with louder approval from fellow students, sporadically chanting “Ole… ole, ole…director do, director do”, a Mizo anthem blended in Hindi to keep the flame burning.
Four students of the eight on hunger strike, namely Kipa Tacha, Rupam Khagaria, Rakesh Roy and Karli Lollen were hospitalized after their condition started to deteriorate.
However, the other four, Rakesh Roy, Dikkar Taji, Ige Riram and Yash Kumar are continuing with the indefinite hunger strike, which was later joined by eight more students who volunteered themselves in the relay-hunger strike.
The SUN has changed its method of agitation on hunger strike by adopting relay-hunger strike.
The SUN decided to continue with the peaceful protest till Tuesday as Education Minister Honchun Ngandam assured them that their demands will be met by Monday.
Speaking to The Arunachal Times, the Education Minister said that according to the centre, by Monday, the NERIST will get a new director.
“MHRD Minister Prakash Javadekar informed us that the director will join soon”, Ngandam said.
He further said that despite the assurance from the centre, which he passed on Friday to the students, the SUN was not ready to budge from its stand.
He said that the governor and chief minister have already informed the centre regarding the situation in the institute, even though it does not fall under the state government.
The SUN threatened to intensify its agitation by blocking the national highway if the centre does not heed to their demand by Tuesday.
Meanwhile, expressing concern over the grave situation, the All Arunachal Pradesh Students’ Union (AAPSU) has decided to enforce closing down of all higher educational institutions (all colleges and universities) in the state on Monday as its first phase of agitation.
The decision came after a central executive meeting held at the central office NEFA Club on Saturday.
Endorsing the SUN’s movement, the apex students’ organisation termed the agitation genuine and legitimate and condemned the negligence by the MHRD.
Eastern Arunachal, Parliamentarian Ninong Ering also expressed concern over turmoil in the NERIST. Ering informed this daily that he would raise the matter in the Parliament session which begins on Monday.
Upset by the development, Union Minister of State for Home Affairs Kiren Rijiju on Thursday wrote to HRD Minister Prakash Jevadekar informing of the situation in the NERIST.
Rijiju informed that ‘considerable delay in appointment of director has resulted in unrest amongst the students and some students are on fast unto death’.
He sought the MHRD’s intervention to end the current impasse in the interest of the students.
Expressing solidarity with the ongoing indefinite protest organized by the SUN, the All Nyishi Students’ Union (ANSU) has urged the state government to accord priority to the students’ genuine grievances and strongly conveyed their grievances to the MHRD.
In a release on Saturday, the union questioned Rijiju and threatened to resort to democratic action in the Capital Complex in case the government fails to address the issue soon.
On Friday, students of the institute built approximately 9 feet tall effigies of MHRD Minister Javadekar and MoS (Home) Rijiju and burnt them outside the campus gate to express their angst against the authorities concerned.