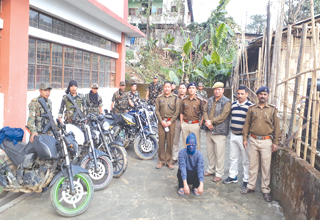 ITANAGAR, Mar 5: The city police has recovered six stolen motorcycles and five scooters (Scooty) from various places and arrested one alleged accused in connection with the bike lifting case.
The recovered motorcycles include two Royal Enfield (Bullet), two Yamaha FZ, and one Pulsar and Avenger each.
These motorcycles were recovered from various locations of Itanagar, Banderdewa, Ziro and Tezpur (Assam), informed SDPO Itanagar K Sikom.
Two motorcycles recovered and kept at the Seppa police station are yet to be brought to Itanagar, he said.
The breakthrough by the capital police was achieved while investigating the Itanagar Police Station case No.62/18 (U/S 379 IPC). However, the recovery of the stolen motorcycles was made based on information provided by the arrested person and active efforts by the Deputy SPs of Lower Subansiri and East Kameng, and Tezpur police.
The motorcycles were already sold to various customers by the accused, Sikom said, adding that police have launched massive search operation to arrest the remaining absconding bike lifters and others involved in various bike lifting cases in the Capital Complex area.
According to SDPO Sikom, bike theft cases in Capital Complex are on the rise and he has been pursuing the matter with police stations of neighbouring districts as well as the state of Assam.