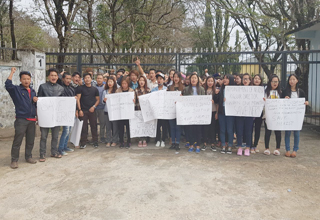 [ Nellie N Manpoong ]
ITANAGAR, Mar 5: The student community of the state came together for the North Eastern Regional Institute of Science and Technology (NERIST) and showed its solidarity to the indefinite protest led by the Students’ Union of NERIST (SUN) against the delay in appointment of a regular director by the Ministry of Human Resource Development (MHRD).
The state-wide shut-down of higher educational institutes (Colleges and universities) by the All Arunachal Pradesh Students’ Union (AAPSU) was put into action by students of both private and government-run institutes. 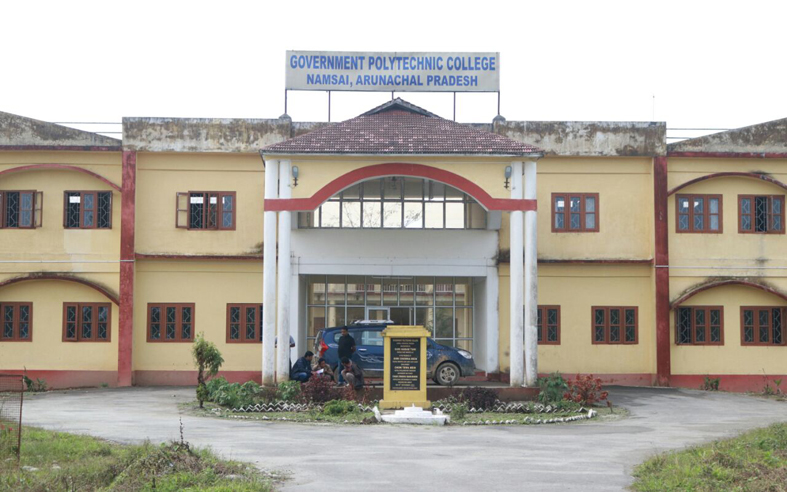 In the Capital Complex, the Dera Natung Government College, Rajiv Gandhi University, Rajiv Gandhi Government Polytechnic, Don Bosco College and several others also showed their solidarity with the NERIST and closed down the institutes for the day.
Reports also came in from West Kameng, Tawang, Lower Dibang Valley, Namsai, Changlang, West Siang, East Siang districts and several other districts, where the students came out in strong numbers to send out a loud and clear message to the MHRD that the North East is not to be neglected.
Speaking to this daily, SUN president Banta Natung said that the NERIST and all its students were overwhelmed with the support of the entire student community and extended gratitude to every single person standing by them.
“This fight isn’t only for the NERIST; it is a fight to improve the entire education system,” he said.
Natung added that if the MHRD still does not notice the gravity of the situation at NERIST then it was evident that the MHRD is neglecting the North East.
Earlier, Minister of state for Home Kiren Rijiju said that he had a meeting with Home Minister Rajnath Singh regarding the appointment of a regular Director.
“The much delayed case is finally sent by HRD Ministry to the appointment committee of cabinet. HM spoke to the cabinet secretary and the file is being put up” he tweeted this morning.
Rijiju appealed to the students, especially those on hunger strike to call off and resume the class.
Eight PhD Scholars have joined in on the relay hunger strike, along with other volunteer students.
The SUN out rightly rejected his appeal stating it won’t trust his statement.
“We did once, it did not work. Send us the official offer/appointment letter”, SUN responded in a tweet.
Meanwhile, the plan to hold ‘Save NERIST’ foot march from the institute to the Raj Bhavan on Tuesday morning has been put on halt as there was no permission from the district administration as the application to hold the foot march came in late in the evening.
On the proposed national highway blockade, Natung informed that the decision has been put on halt due to the ongoing CBSE examinations.
A meeting was also held on Monday evening by the AAPSU, where it was decided that the movement would be intensified.
“The union will intensify its agitation if the MHRD fails to listen to the demands of the NERIST students,” AAPSU general secretary Tobom Dai informed, adding that “it will be in the best interest of peace and tranquillity if the imbroglio is solved at the earliest”.
“Our biggest concern is that students on hunger strike are hospitalised”, he added.
Earlier, AAPSU vice president (Admin) Meje Taku led his team today and made the situation in NERIST be known to all concerned.
Further, State Bharatiya Janata Party (BJP) president Tapir Gao said that he had spoken to HRD Minister Prakash Javadekar on Sunday and informed of the situation here in NERIST, who in turn had assured that appropriate action would be taken at the earliest and that he (Gao) would be updated on it by Monday.
However, the state BJP president said late Monday evening that he is yet to receive any communication from the HRD office.
Gao also said that he would ensure that the entire situation is solved before Saturday, adding that if the situation is not resolved then the state BJP too would sit-in with the SUN in their indefinite protest.
Member of Parliament (Lok Sabha) Ninong Ering also wrote to Javadekar on Monday and highlighted on the situation at NERIST. He urged the union minister to appoint a full-time director for the institute and “bring back education to life in the campus”.
The state unit of the Akhil Bharatiya Vidyarthi Parishad (ABVP) also wrote to Union Minister Javadekar, seeking early appointment of a director for NERIST, failing which, the state unit ABVP said that it would also join the indefinite protest of the SUN.
The SUN has been on an indefinite protest since 27 February at its campus.
The Raj Bhavan did not respond to the e-mail from this daily, while Education Minister Honchun Ngandam could also not be contacted.
The 34-year old institute has been without a regular director since 7 October, 2014 and it is affecting over 1800 students (from base level to post graduation level) of the North East and India. Several PhD scholars have also reportedly left the institute due to non-disbursement of scholarship on time.