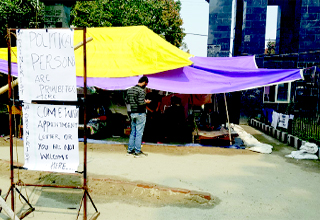 [ Nellie N Manpoong ]
NAHARLAGUN, Mar 6: The week-long struggle to bring in a permanent director for the North Eastern Regional Institute of Science and Technology (NERIST) has left students of the NERIST highly discouraged even as Professor HS Yadav of the NERIST’s Chemistry department was appointed as the new director of the institute on Tuesday.
Instead of celebrating the appointment of the new director, many students could be seen on the verge of tears and at a loss for words.
Notably, Professor Yadav was the director in-charge of NERIST from 19 April, 2016 to 26 March, 2017 before he was sacked by the Ministry of Human Resource Development (MHRD) on alleged grounds of “mismanagement”.
The students had made it clear from the very beginning that they do not want a faculty member of the institute to be appointed as director as they already have had bad experiences with faculty members who were put in authority of the NERIST previously.
Speaking to this daily, final year student (MTech) Tinu Lusi said, “We are all very unhappy with this decision. This is not what we were expecting”.
“How can Prof Yadav be appointed when he was removed by the MHRD itself? If the MHRD is unsure of its previous decision then we are left with no words”, she said.
She elaborated that the students had made the demand for a director from outside the state so that someone with fresh ideas and a different perspective could guide the students and faculty to help bring back the lost glory of the NERIST.
The students in the campus did not hesitate to show their resentment with Minister of State for Home Affairs Kiren Rijiju for what they termed “playing politics” and leaving the institute in a lurch.
A first year student (Electrical), Shreyashi Bhattacharya also resonated the voice of many other students.
“The news was not satisfactory and we are not ready to give up our fight till we get someone from outside the state”, Bhattacharya said, adding that the students have lost all hope in the government.
A faculty member, who did not wish to be named, also said that many of them did not approve of the decision to appoint Prof Yadav as the director, adding that “there is already an inquiry against him for mismanagement of funds”.
Students’ Union of NERIST (SUN) president Banta Natung also informed that they received the news of the appointment of Prof Yadav while they were on the ‘Save NERIST’ foot-march from the campus in Nirjuli to the Raj Bhavan in Itanagar.
Natung informed that Education Minister Honchun Ngandam sent him a photo of the letter of appointment on his phone.
“The news has shocked and left everyone upset, including the students and even the faculty members,” Natung said.
He said that the students have seen his (Prof Yadav’s) work when he was the director in-charge and was left dissatisfied. He also reiterated the question on everyone’s lips, “If he was to be reinstated as the director, then why was he sacked in the first place by the MHRD?”
The students were also suspicious that Professor Yadav had been lobbying for the director’s post like a “politician” as he had left for New Delhi just days before the protest and is yet to return.
“NERIST is not for politicians, it is for bureaucrats and technicians, Natung said.
“He (Prof Yadav) has succeeded in his attempts and we have failed in saving our institute; we have failed NERIST”, said Natung dejectedly.
“Our MoS (Rijiju) had spoken of an ‘internal strife’ and of ‘politics’ within the institute. I think this was the politics. No one is happy with the decision and since the MoS has a big influence on this decision, we request him to please reconsider it,” Natung appealed, along with fellow students.
On reports that the MHRD had earlier started processing the file for appointment of Professor BV Ramana Reddy, the students questioned on how the attempt to appoint Prof Reddy was suddenly neglected, and how Professor Yadav’s name came out of the blue.
Professor Reddy of the University of School of Information and Communication Technology and Guru Govind Singh Indraprastha University New Delhi was reportedly selected for the coveted post and was supposed to join by 28 December, 2017. However, it was later postponed owing to internal complaint lodged by the few faculty members whose name are yet be known.
Further, Natung informed that union representatives of all the eight north-eastern states, other students unions within the institute, along with the NERIST Faculty Association, NERIST Employees’ Association, and all stakeholders of NERIST would give a clear decision by Wednesday.
Earlier in the morning, volunteer students of the institute started the ‘Save NERIST’ foot-march in batches of four to five people from the NERIST to the Raj Bhavan, but several of them were stopped midway by police and other security forces near the Naharlagun main market.
However, some students had succeeded in reaching close to Itanagar to send their sentiments across.
Meanwhile, even as the SUN resisted the appointment of the new director, the All Arunachal Pradesh Student’s Union (AAPSU) welcomed the HRD ministry’s decision for appointment of new NERIST director.
The AAPSU in a release expressed hope that with the appointment of new Director Dr HS Yadav, the NERIST would regain its lost glory.
The apex student body also extended its thankfulness to all concerned that stood by with the AAPSU and the NERIST students’ fraternity in their weeklong struggle to save the glory of the premier institute.