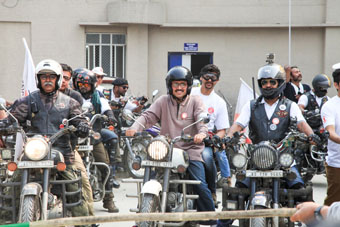 Staff Reporter
NAHARLAGUN, Mar 15: The motorcycle rally for cancer awareness campaign “Beat Cancer: Run and Ride 2018″arrived at the Tomo Riba Institute of Health and Medical Sciences (TRIHMS) here on 15 March.
The event in TRIHMS started off with a 5 km marathon, participated by students, teachers and volunteers.
The key theme of the event was the need for public awareness regarding cancer, its early detection and the need for collective community involvement in the fight against cancer. Special emphasis was laid on abuse of tobacco and unhealthy food habits (high carcinogen content in smoked meat and in other edibles) prevalent in North-East area.
Arriving in the state with the bullet club, Silchar Thumpers, Dr Ravi Kannan, director of the Cachar Cancer Hospital & Research Centre said, “This rally aims to spread awareness on cancer and importance of early detection”.
Speaking to this daily, Dr Kannan informed that cancer incidences in the North East are much higher than the incidences of cancer in the country.
“According to the registries in Arunachal, Papum Pare has one of the highest incidences of cancer in India and I think major reasons for this are tobacco and infections”, he said.
He informed that tobacco hurts in the most productive years of live. In a population of five crore (North East), 40 percent use tobacco (2 crore population), and 30 percent of them will die prematurely because of tobacco consumption; which means that 70 to 80 lakh people in the North East will die prematurely.
“It takes about 10-15 years for tobacco to start showing the ill-effects. But with children consuming tobacco in various forms these days at the ages of 14-15, the ill-effects of the continued tobacco consumption will start showing in 25-30 years of age, and eventually kill the person in the next five to six years,” explained Dr Kannan.
“If we remove tobacco from the scene, at least 50 per cent of the cancer will be removed”, he said.
Addressing the gathering, Director of Health Service, Dr M Lego said, “Doctors and physicians can only rely on diagnostics and tests to detect and cure cancer, but the steps for awareness and prevention is in the hands of the public. The awareness campaign must percolate down to village level which is particularly in need of this information”.
Dr Lobsang Tsetin said, “Cancer is the leading cause of death. One-third of cancer can be cured if detected early”.
Director of Family Welfare, Dr K Lego said, “This rally (Run and Ride against cancer) is first of its kind and a noble step. The need of the hour is awareness”.
Chief of the Silchar Thumpers, Manilal Zaigirdar said that this was one of the several rides they take out on various issues concerning the society.
“We go on rides to create awareness on various issues. But this was one of the largest rallies we have taken out for the entire North East. We collaborated with the Royal Enfield clubs across the North East to make it a community event with hopes that the message would spread further”.
“The people we met on our journey also shared their stories on battling cancer, which made it a learning experience for us all”, he said.
Joining the Silchar Thumpers in the capital for the awareness rally, Chief of The Gliding Piranhas Motorcycle Club, Techi Topu said that the initiative to spread awareness on a deeply concerning issue was inspiring and that the club would soon make efforts to do an inter-district ride to spread the message to the rural masses.
The Silchar Thumpers and their team were given a formal send-off for Dibrugarh today from TRIHMS.
Organized by the Tata Trusts, Cachar Cancer Hospital and Silchar Thumpers Enfield club, along with various other organizations, the rally started off from Silchar on 12 March with the aim of covering all seven North-East sister states in 11 days. The riders will cover a total distance of over 2100kms.