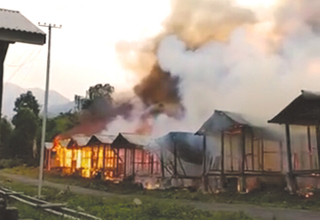 [ Karyir Riba ]
ROING, Mar 18: Eighteen dwelling houses were devoured in a devastating fire accident that broke out at Model Village (under DUDA Roing) here this afternoon.
The wind-aided fire spread quickly to the closely built houses and reduced all the 18 houses to ashes before the fire fighters brought the flame under control after hours of rigorous efforts.
Fortunately, there were no casualties reported.
The fire is suspected to have started from an unattended fireplace around 3.30 pm.
Fire Station in-charge Kasem Tayeng informed that strong winds made it difficult for the fire fighters to contain the blaze. Fire fighters with fire tenders were kept ready in the village till 7.30 pm to avoid any further damages.