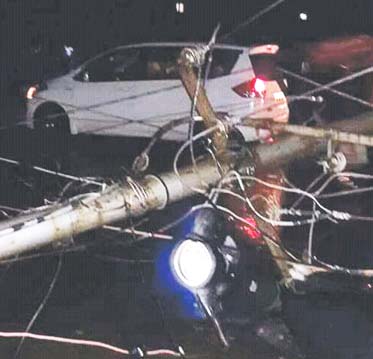 Staff Reporter
ITANAGAR, Mar 29: At least a dozen houses have reportedly been damaged by a powerful thunderstorm that lashed the capital on Thursday evening.
The powerful wind blew away CGI sheets at several places. There are also reports of uprooting of electric poles at several places in Itanagar, causing disruption in power supply.
A few cars were also reportedly damaged by electric poles at Niti Vihar, Itanagar. Portions of roads were blocked by fallen trees at Chimpu, near Legi Complex, near Punjabi Dhaba, and Jollang.
The capital complex district administration has confirmed that no casualty has been reported so far. However, it stated that the storm has left a trail of destruction behind.
DC Prince Dhawan immediately directed the departments concerned to restore the power lines and clear the road blocks, and directed the administrative officers to verify the actual damages and submit their reports to his office. He also informed that men and machineries have been kept ready for any kind of eventuality.
The DC has issued a strict directive to TK Engineering Consortium Pvt Ltd to immediately clear the debris and mud accumulated by landslides in the firm’s working areas. He appealed to the residents of the capital complex to be alert and be prepared for disasters in view of the approaching monsoon season. (With input from DIPRO)