Staff Reporter
ITANAGAR, Mar 30: The cyclonic thunderstorm that blew across Papum Pare district and adjoining areas on Thursday evening has caused massive disruption in power supply in the capital complex.
On Friday, Power Secretary Kaling Tayeng informed that complete restoration of power supply in the capital complex may take time because of multiple disruptions to the 33 kv, 11 kv, and LT systems.
Tayeng, however, said the 33 kv main line to Lekhi, Court Street, and G Extension, Naharlagun, has been restored. The feeders of PHQ, Niti Vihar, Senki Park, Raj Bhawan, and RK Mission are also partially charged, he said, adding that “clearance is awaited from DDK to P-Sector, Vivek Vihar, and Jullang.” 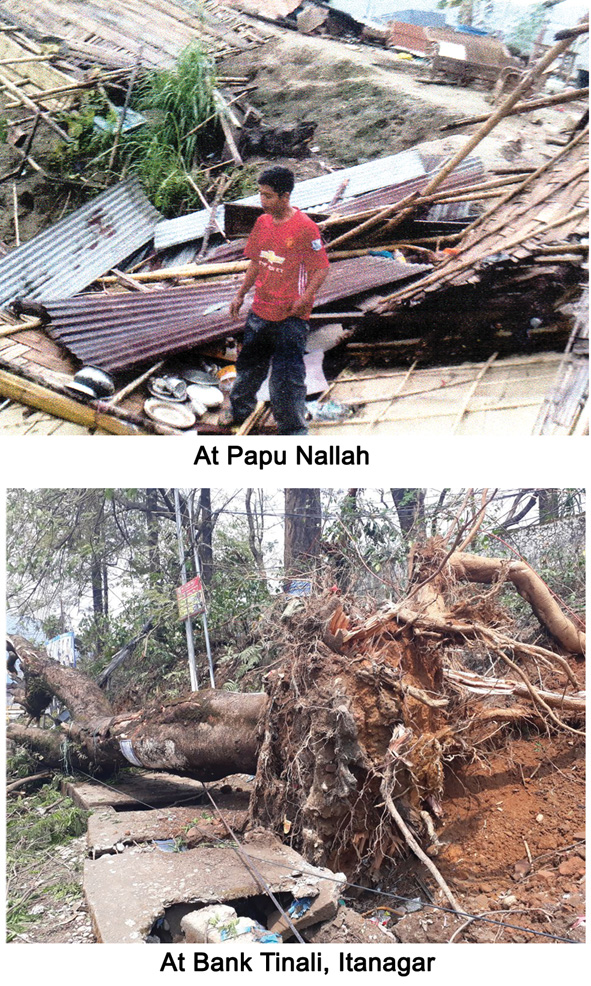 He said though the state grid failed because of “transient of lightning and a minor bamboo-earth fault,” there has been no tangible damage to the grid.
“The grid is being restored gradually after ensuring all vital safety and protection parameters and post-strike health,” Tayeng informed.
He also informed that the grid power to Ziro, Daporijo and Aalo has been restored, and that “Pasighat, Tezu and Roing are being charged now.”
The capital complex was thrown into darkness after a ferocious thunderstorm appeared without warning and damaged power lines on Thursday evening.
DIPRO adds: Capital Complex DDMO Moromi Dodum Sonam informed that 19 houses have been totally damaged, as per reports received from administrative officers of Itanagar, Naharlagun and Banderdewa.
She said the total number of houses that have been partially damaged stands at 400.
Apart from these, several trees have been uprooted in Itanagar and Naharlagun, snapping power supply and damaging some houses and cars.
The DDMO added that relief items would be distributed once the official modalities are completed.
Meanwhile, Capital Complex DC Prince Dhawan has urged the residents to remain calm and be prepared for any kind of eventuality.
He has also provided the contact numbers of the DDMO (8787336331) and the FO (8794765727) for people to call in case of emergencies.

Trail of devastation
The powerful thunderstorm that lashed the capital on Thursday evening has devastated the city. Reports of damages caused to public as well as government properties are pouring in from various parts of the capital complex.
Rajiv Gandhi Government Polytechnic (RGGP) – the lone government-run technical institute in Itanagar – has suffered major damages. Electricity supply to the institute has been disrupted and multiple damages have been inflicted on the institute’s infrastructure.
Several trees which were uprooted blocked the main road that leads to the campus. Also, a high-tension electric wire fell down on the road. The roofs of both the girls’ and boys’ hostels were ripped apart by the wind, and the hostels were flooded with rainwater. This has forced the students to leave the hostels and arrange temporary accommodation at their friends’ and relatives’ houses.
The institute’s main academic block has also suffered heavy damages. Almost all the windows of the building have been broken, and the glass wall at the main entrance has been completely damaged. The thunderstorm inflicted damages to the faculty and staff quarters and temporary sheds, as well.
Lecturer-cum-campus in-charge, Joram Arun has appealed to the authorities concerned to look into the matter and initiate relief measures at the earliest.
Meanwhile, the All Papu Nallah Youth Welfare Association in a release on Friday claimed that 50 houses in Papu Nallah have been damaged by the thunderstorm, rendering many families homeless.
It appealed to the administration to help the affected families.

‘Over 2000 families affected’
According to state BJP vice president Tame Phassang, more than 2000 families have been affected by Thursday’s thunderstorm.
‘It has been learnt that more than 2000 families have been affected by the thunderstorm,’ said Phassang, who along with other party leaders visited storm-affected areas in Itanagar and Naharlagun on Friday.
He personally contributed money as immediate relief to the affected families.
In a press release, Phassang appealed to the state government to take immediate steps to assist the affected people. He also urged the department concerned to assess the properties lost or damaged in the storm, and to provide relief as soon as possible.