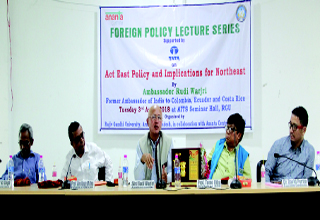 RONO HILLS, Apr 3: Rajiv Gandhi University (RGU) on Tuesday hosted former ambassador of India to Colombia, Ecuador and Costa Rica, Rudi Warjri, who delivered a lecture on ‘Act East Policy and implications for Northeast’.
The event, held under a ‘Foreign policy lecture series’, was organized by the RGU in collaboration with the New Delhi-based Ananta Centre and Tata, at the university’s AITS seminar hall.
Speaking on the various dimensional aspects of the Act East Policy (the erstwhile Look East Policy), covering geopolitical and strategic security issues, economy, trade, commerce, etc, Warjri stressed on practical implementation of the policy, involving the people of the region.
He emphasized on the concept of regional comprehensive economic partnership, and spoke at length on the ASEAN-India linkages.
Mentioning the trilateral highway connecting Moreh, Tamu, Mae Sot and the Kaladan multi-modal connectivity tract, the tunnel under Sela Pass connecting Dirang and Tawang, and the UDAN Scheme on air connectivity, Warjri stressed on the significance of regional connectivity vis-à-vis local area connectivity improvements.
He also spoke on the Asia Pacific Economic Cooperation, highlighting the works of the Bay of Bengal Initiative Multi Sectoral Technology Economic Cooperation (BIMSTEC), involving the neighbouring countries of Bangladesh, Sri Lanka, Thailand, Myanmar, Nepal and Bhutan.
“Arunachal Pradesh being the largest state has its strategic importance to India and the Northeast, against the backdrop of a neighbour claiming it to be theirs,” he said.
He said Arunachal, with resources like medicinal plants, flora and fauna, cash crops, mineral, hydro-tourism potential and geopolitically important places like the Pangsau Pass, the Stilwell Road and Buddhist monasteries, has a tremendous scope to grow.
Warjri suggested creating a Northeast Implementation Agency within the Act East Policy, and improving border trade by opening border haats and border points.
However, he expressed apprehension over cross-border crimes such as goods, arms and human trafficking, besides the problem of pumping in of counterfeit Indian currency.
Senior Economics Professor Amitava Mitra said the Act East Policy “has more of internal angles to look into rather than external angles only.”
He said there is absolute need to have such a policy towards improving connectivity issues in the region. Mitra also called for greater attention of the executing agencies to expedite infrastructure development.
Earlier, RGU Registrar In-charge Prof Tomo Riba said that “the talk is of immense value and will benefit the academic world in particular and the society in general.”
Social Science Dean, Prof Sudhir Kumar Singh Tribal Studies Assistant Professor Lisa Lomdak also spoke.
Mass Communication Assistant Professor Moji Riba moderated the interactive session held after the lecture, during which Warjri fielded questions and observations put forward by faculty members and research scholars.
RGU Joint Registrar Dr David Pertin, who coordinated the event, said the lecture series “is a programme through which the university intends to cover vital areas having its impact on the society in one way or the other.”
A galaxy of academicians and other stakeholders of the society also attended the programme.