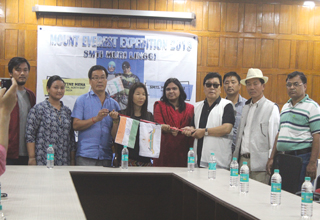 ROING, Apr 5: After bringing laurels to the state by giving it the first Everester from Northeast India in the form of Tine Mena, Lower Dibang Valley district is set to dish out yet another Everester.
Forty-year-old Muri Linggi, a mother of four daughters – the eldest of whom appeared for her Class 12 CBSE examination this year – is all set to start her journey to become the next Everester to be produced by Arunachal Pradesh.
Her Everest expedition was flagged off here on Thursday by Rajya Sabha Member Mukut Mithi.
Linggi said that she took inspiration from Tine Mena and started her mountaineering career in 2013 with a recce track from Anini to Maline, in Dibang Valley district, with Mena. She also accompanied Mena in a women’s expedition in Himachal Pradesh, and climbed the 6622-metre-high Mount Menthosa.
In the same year she also completed an advanced course in mountain climbing at the NIMAS Army Institute, Dirang.
In 2016, Linggi accompanied Everester Anshu Janshempa in another women’s expedition to the 6222-metre-high Gorichen peak.
Reportedly, the Everest expedition will require a minimum of Rs 20 lakh to materialize. The sports & youth affairs department has sanctioned Rs 10 lakh, and the NHPC’s Dibang Multipurpose Project has contributed Rs 1 lakh, while the Madhucon group has assured to contribute Rs 1 lakh, and NGO Arunachal Women and Child Welfare Society has contributed Rs 50,000.
Apart from these, well-wishers like MP Mukut Mithi, IMCLS VP Bhishen Mepo, and the Iduli ASM chairperson have also contributed.
DSO Raju Mipi informed that the Jawahar Navodaya Vidyalaya here will soon be taken under the wings of the Sports Authority of India, and the district will also soon boast of a Special Area Games (SAG) school.
“These steps of the government will give more encouragement to the children, and will produce more sportspersons from the district,” said Mipi.
Everester Tine Mena, who was also present at the flag-off ceremony, said, “Sometimes in the mountains, even the smallest hurdles give immense pain and dejection.”
She advised Linggi not to give in to such dejections and to push ahead and achieve her goal, no matter what.
Linggi will go through an extensive training for 57-58 days before setting out on the expedition.