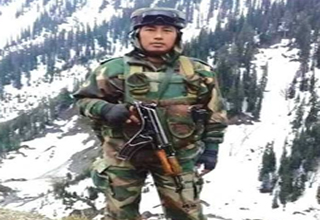 Great minds have said that some people are born to be heroes, while others propagate that people become heroes by their hard work an inspirational deeds.
Late Havaldar Hangpan Dada, Ashok Chakra (posthumous), belonged to the latter category. His courage of conviction to fight for his motherland, along with his amazing leadership qualities has torched a baton of hope and inspiration for the youths of his town, state, and nation.
‘Dada’ – that’s how the small, quaint town of Khonsa refers to its hero. Born on 2 October, 1979 in Borduria village, Dada was a soul who shook the small town of Khonsa from its deep sleep to an awakening reality.
Born in a heavily insurgency-affected society where the youths were made to feel like outsiders from the rest of India, he should have had an identity like that of any other Indian citizen.
Dada’s childhood friend and fellow soldier, Havildar Hanja Matey recalls: “Those were the days when the insurgent groups would demand a certain portion of the salaries of the army personnel residing here. Dada defied this and refused to give in to their demands, and surprisingly, the insurgents never asked us for money again.”
Dada laid down his life in May 2016, in Kupwara, Jammu & Kashmir, fighting terrorists trying to infiltrate into India. He killed three out of four terrorists before he was hit by a stray bullet and succumbed to his injuries. The nation lost a valiant soldier and Khonsa lost its brave son. Once an insurgent supporting and tolerating town, Khonsa was thrown into gloom over what it lost, and the youths awakened to the buried reality of patriotism which Dada proved with his life.
Dada came back home for the last time, wrapped in the tri-colour, silently leaving a spark in the minds of the youths and inspiring generations to follow.
‘Badlu Ram ka badan zameen ke neeche hai, toh hamein uska ration milta hai’ – the regimental song of the Assam Regiment.
These lines are now in the veins of the natives of Khonsa who enjoy freedom and celebrate Dada’s martyrdom.
‘The body is perishable, but the dweller is eternal, indestructible and impenetrable,’ says the Bhagwad Gita, and the saying holds true in Khonsa as Dada’s indestructible soul has elevated the perspective of the locals towards patriotism.
He started a silent revolution – one that was bloodless yet vehement – and the people of Khonsa understand what time has portrayed. More young men are dreaming of joining the armed forces and carrying Hangpan Dada’s legacy forward. More young blood is getting into the army, the police, the task force and what not – boys and girls alike are not only determined but adamant to make the change tangible.
Ask a young man strolling in Khonsa market which tribe he belongs to, and he smiles and says, “India.” Ask the young junior Hangpan Dada what he will become when he becomes a young man. With a toothless smile he answers, “Army officer.”
In his picturesque native village, Havildar Hangpan Dada sleeps peacefully in a deep slumber, watching over his town and his people. The youths are no longer falling prey to vagrancy; they have a vision and they have a hero to idolize.
The town and its people have taken an unspoken pledge that they will not let their hero remain unsung. The state government honoured Dada’s bravery by awarding him the Arunachal Ratna.
Youths are rushing, clicking their boots and working hard to join the armed forces, following Dada’s footsteps, singing in his cadence of valour.
To remember his service, The Assam Regimental Centre has named its main office block at it headquarters after Hangpan Dada. The plaque was inaugurated by Dada’s wife, Chasen Lowang Dada. Chief Minister Pema Khandu renamed the annual football and volleyball (men and women) tournaments for the Chief Minister’s Trophy as Hangpan Dada Memorial Trophy.
The legacy of leadership and inspiration left behind by Dada will forever continue to inspire the youths in the times to come. (The writer is an officer in the Indian Army)