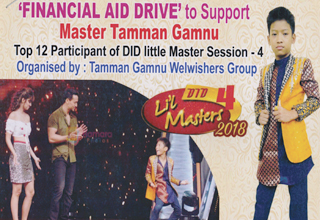 Staff Reporter
ITANAGAR, Apr 5: Twelve-year-old Tamman Gamnu from Itanagar has entered the Top 12 round of the dance reality show Dance India Dance (DID) Little Masters Season-4.
The reality show has Siddharth Anand, Marzi Pestonji and Chitrangada Singh as the judges, and Mithun Chakraborty as the ‘grandmaster’.
The talented Class 6 student of Kendriya Vidyalaya-I, Naharlagun, was selected in the reality show’s audition rounds held in Itanagar, and then at the Level-3 audition in Kolkata. Tamman is currently in Mumbai with his father.
Speaking to The Arunachal Times, Tamman’s father, Taga Gamnu, who works in the labour commission department as a peon, informed that only two contestants from the Northeast – Tamman from Arunachal and a girl from Meghalaya – have qualified for the Top 12 round.
He said Tamman could not sit for his exams this year owing to the rigorous selection process “which could continue up to three months.”
Meanwhile, Tamman’s well-wishers in Itanagar have appealed to the state government to extend financial support to the young talent who is bringing laurels to the state.
They said Tamman’s family is facing hardship in managing their expenses as they have to stay in Mumbai for the auditions.
The well-wishers will conduct a three-day ‘financial drive programme’ in the capital complex from 7 April, they said.